The death of Ataturk's vision 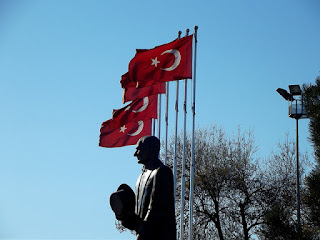 We went to bed on Friday night in the UK as a coup attempt by sections of the Turkish military was underway. Amid the chaos, there was an element of high farce as President Recep Tayyip Erdogan, a big fan of censorship and shutting down social media, was trying to speak to the nation on TV via Facetime, until the call dropped out. There were claims he was seeking asylum in Germany but Angela Merkel wouldn't have it.

And, most hypocritically of all, Erdogan was calling for his supporters to take to the streets. Late at night. During a military coup. This is the same man who responds to people publicly protesting against his awful government with tear gas and rubber bullets.

But he was more than happy to let his fans loose on the streets on Friday night. According to Prime Minister Binali Yildirim, 265 people were killed in the coup attempt, including civilians.

Boris Johnson, our new Foreign Secretary (yes, I know...), said he spoke to his Turkish counterpart, Mevlut Cavusoglu to express support for the country's "democratically elected government and instititions".

However, there is evidence that the November 2015 elections were affected by fraud. These are the elections which President Erdogan's AKP Party won after losing an election in June 2015 and forcing a caretaker government rather than forming a coalition. He is a man who does not want to relinquish his grip on power. The Washington Post used an electronic electoral forensics toolkit to conclude that the results were most likely not above board. It could well be that, amazingly, voters in Istanbul cast 1.66 votes each as an email was leaked that appeared to show 10,316,871 voters cast 17,104,607. And then the official election results website went out of service. Incredible!

In any case, it is just another example of how democracy should not simply start and end at the ballot box. Gloating Brexiters telling Remainers to get over it, take note.

As well as police routinely opening fire and tear-gassing anti-government protests in Turkey, internet censorship laws were passed in 2007 and amended in 2014 to broaden the scope of government blocking and to make it easier for the authorities to access data without a warrant, Twitter, Facebook and YouTube were temporarily blocked in April 2015 until they complied with severe restrictions, social media was blocked during the coup attempt, dozens of Turkish citizens have faced charges for criticising the government online, the Homeland Security Act 2015 increased the amount of time for which investigators can conduct wire taps and similar operations without a court order from 24 to 48 hours, and Turkey currently sits at a dismal 151 on the World Press Freedom Index out of 180 countries, dropping two places from last year.

It should come as no great surprise to anyone who has been observing Turkish politics for any extended period of time that a coup attempt happened over the weekend. The methods employed by the coup leaders will be debated for years to come but there are plenty of people in Turkey who may not be a fan of the methods yet they still agree with the stated aims of returning their beloved country to a proper, functional secular democracy.

We will never know if the coup leaders would have paved the way for a return to Ataturk's vision but we do know that dark days lie ahead for Turkey. Six thousand people have been arrested. There is serious talk of a return to capital punishment. It is a barbaric slippery slope to say it will be reintroduced simply for coup leaders. Does anyone trust Erdogan not to reintroduce it on a wider scale? For dissenters or journalists perhaps? They've already jailed two prominent journalists this year in outrageous circumstances.

Are we witnessing the birth of Erdogan's Islamist dictatorship?

None of this will help Turkey's bid to join the EU. Anyone who scaremongered about Turkey during the referendum campaign should feel pretty stupid today, although these people seem to be impossible to embarrass. And Turkey's role in the refugee crisis is now up in the air and this could have tragic consequences. The only positive would be for this to force the EU to work together properly on constructive solutions instead of member states taking simplistic, hardline approaches usually in a bid to appease rising far right groups across the continent.

It is a mess and, because of Turkey's fulcrum-like geographical location, it is a mess that will not be contained within its borders.

Photo by Faruk/Flickr
Posted by Georgia Lewis at 11:55