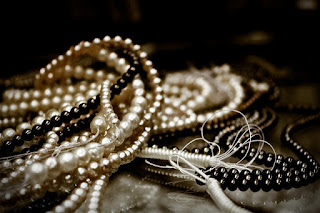 Would you like some pearls to clutch while you carry on about the culture secretary, John Whittingdale's long-finished relationship with a sex worker?

For this story is not about press regulation, or blackmail, or Leveson. It is about prudery and the inability of people to mind their own damn business. It may also be about the Tories and a complicit press merrily throwing one of their own under a bus to stop people talking about piddly little things like tax reform, but most of all, it is about prudery.

There have been some rather unsavoury suggestions that Whittingdale was blackmailing journalists who knew of his past relationship with a sex worker. Something along the lines of: "If you run that story about my personal life, I'll tighten the screws on press regulation!". But nobody has been able to produce any evidence of this being the case.

If this is what happened, we have a problem. It would be a serious compromise to the office of Culture Secretary if Whittingdale was holding journalists over a barrel in such a manner. If any journalist has any evidence of such outrageous behaviour by a member of the cabinet, please speak now or forever hold your peace.

There are loud howls from the peanut gallery as to why journalists who knew about Whittingdale's relationship with a sex worker held off on publishing such a supposedly embarrassing story.

If it was the case that Whittingdale was blackmailing journalists, he should resign, and the blackmailed journalists would surely be calling for his resignation on those grounds.

But what if the story simply failed the "So what?" test. What if the journalists who were fed the information by another sex worker out to make a quick quid decided that a relationship between two single people that has long since ended was not newsworthy? What if it was decided that there was no news value in reporting on a past relationship that happened well before Whittingdale was Culture Secretary and involved a woman who is not and does not seek to be a public figure?

What exactly are people shocked about here? That sex workers exist? That an MP might, quite legally despite other outdated laws, pay for sex? Or that a sex worker would have the temerity to join a dating website and seek to have a personal life?

Is British society so whore-phobic that collectively a dim view is taken of a sex worker seeking a relationship outside of work, something the rest of us in supposedly respectable jobs take for granted?

Whittingdale's relationship did not break any laws. He has not attempted as an MP to pass punitive legislation in relation to sex workers nor has he ever put himself forward as a "family values" spokesman. As such, he is not a hypocrite.

The only way I can see to move forward from this fiasco is for Britain to finally grow up and quit being shocked by sex workers or by the sex lives of consenting adults. We need to get over our appetite for non-news stories about stuff that affects nobody outside of the relationship. This current debacle is pathetic. John Whittingdale's long defunct relationship is not news. Can we please move on and discuss things that are actually important?

Picture by FergalFam007
Posted by Georgia Lewis at 06:49