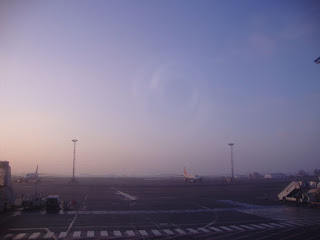 How do you know when a load of Australians has landed at Heathrow? You can still hear the whining long after the plane has landed. Yes, very droll. But airport whining is not restricted to people from the country where I was born.

On November 2, I returned to London after a weekend in Newcastle and picked up a copy of the Evening Standard at Kings Cross station for the tube ride home. The front page and a spread inside were dedicated to the "chaos" caused by thick fog at Heathrow airport. While the story was a change from their usual worship of Boris Johnson, it was just a compendium of first world whiners. Even Olympic cyclist Sir Chris Hoy joined in the moaning.

Apparently, the airlines and the airport could have done more. Nobody seemed to have any concrete suggestions about what could be done to fix a weather event beyond human control, but "more" of something was apparently required. The gripes centred on not receiving texts or emails from airlines in a timely enough manner. People were furious about turning up at the airport - presumably they travelled to the airport with their eyes closed, oblivious to the pea souper that shrouded the nation - only to be stunned that fog delayed their flights. Aside from the texts and emails warning passengers of likely delays and cancellations owing to fog, I'm not sure what else the airlines could have done. Tried to blow away the fog with giant hairdryers? How the hell did these overgrown babies cope with air travel before the advent of texts and emails?

Cancelled flights suck but flying in a plane where the pilot cannot see beyond the nose cone is hardly a reasonable alternative.

And this week, we've witnessed endless news time gobbled up by footage of British tourists stranded at Sharm el-Sheikh after the Russian plane crash and complaining that they just want to go home. I get it. Even after an idyllic holiday, there comes that bit at the end when you've packed up, headed to the airport, and your thoughts turn to being reunited with your own bed.

But, seriously, being stranded for a bit longer at a secure resort - and the resorts have stepped security enormously since the 2005 terror attack - is hardly the worst thing in the world. If I had to take an enforced extended Sharm holiday while I was waiting for a safe flight home and a news channel rocked up at my resort, I would happily appear on camera. I'd be thrilled to give a big up-yours to the terrorists by letting them know I was not scared of their murderous bullshit, that, despite the tragedy of the plane crash, I was determined to enjoy some bonus time in the sun, wearing a sinful bikini and drinking cocktails. Hell, it is only the fact that I am happily married that would stop me from adding fornication to my list of haram behaviour.

Of course, as soon as last night's Dr Who showed a scene where a plane was shot down, a Twitter fauxrage erupted. When I tweeted that the show is fictitious and the writers are not actual time-travellers who were to know that a plane crash, possibly linked to terrorism, was going to happen that week, some random internet stranger accused me of showing no respect to the Britons stranded in Egypt. Said internet stranger made no mention of dead Russians, just people stuck on sun loungers for a few more days.

This is the pathetic level of analysis going on at the moment - misplaced sympathy and kneejerk reactions to an episode of Dr Who. Of course, if the people who freaked out about the scene of the plane being shot down bothered to watch the entire episode, they would have seen it in its full context, which was a powerful allegory about the sorry state of the world and the futility of attempting to achieve peace with more war.

It was a stellar piece of acting by Peter Capaldi, it rose above such flinty noise as people whining in airports, and it was entirely appropriate for this Remembrance Sunday weekend.


Photography by Luisa Mota
Posted by Georgia Lewis at 12:39