Thoughts on Paris after the inevitable atrocity 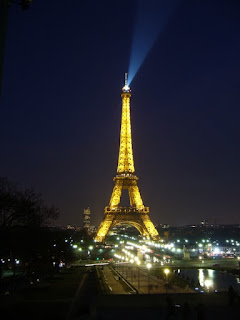 Here, in no particular order and with absolutely no sense of optimism about anything I say having any kind of influence, are some musings on the aftermath of the horrific events that took place in Paris on Friday.

1. Firstly, let us refer to Islamic State as Daesh for they really hate it. This is something people from across the political spectrum agree upon. Hell, I even agree with Tony Abbott on this one. That said, it is important to recognise that they are indeed attempting to create a state, they have had some success in doing so over relatively large areas, and, therefore, it is important to treat them like any other vile, repressive state. We should not recognise their sovereignty over the land they have stolen. We should not trade with them. We should join with the people who have lost everything in doing all we can to help them return home and for prosperity and peace to prevail.

2. We need to call on the countries that surround Daesh's territory to come together as one on this issue, even if they disagree on many other issues. Saudi Arabia, in particular, cannot continue enabling Daesh's ongoing existence - they have played a major role in creating what is essentially a more violent version of the absurd Wahhabism that has turned Saudi into a gruesome laughing stock, even among its Arabian Gulf neighbours. And Saudi's neighbours have played their role in enabling poisonous ideology to spread, even if this has sometimes occurred by complacency rather than design. In any case, no one country or small group of countries should ever play the role of the global policeman.

3. And just as we need to acknowledge that Daesh's ideology is a particularly vile theocracy that is just as political as it is religious (if not more political than conveniently religious...), the West needs to acknowledge its role in destabilising the Middle East. This has been going on for a while now. And all we are left with are crude hypotheticals to which we will never know the answers. These include: Would 9/11 have happened if Gore than Bush was president? Regardless of who was president and 9/11 still happened, what would have happened if America took a truly Biblical turn-the-other-cheek approach and didn't plough into a misguided war with Iraq? What the hell has killing Osama bin Laden achieved apart from a mic-drop moment for Barack Obama? What intelligence has died with bin Laden, Saddam Hussein, Muammar Gaddafi and even the relative minnows, such as Mohammed Emwazi?

4. Merely attempting to bomb our way out of the current state of affairs is probably not going to be particularly effective. Daesh should have its lines of communication cut off too. In the aftermath of this weekend's events in Paris, some idiots seemed amazed that murderous thugs in the Middle East could communicate with murderous thugs in France. It is the same mentality that leads to people saying moronic things such as: "Those people cannot be refugees if they have mobile phones!" as if modern telecommunication only happens in the West. Bombs are raining down on Daesh targets in Raqqa as I write this post but it will not be enough. The city was already bombed last November and the main casualties were civilians.

5. Likewise, Daesh should have its weapons supply lines cut off. This will be quite the task but it is essential. Daesh's arsenals are made possible because of modern transportation as well as weapons from eastern European arms manufacturers getting safe passage into Syria through Turkey, Libyan armouries ending up in Syria, captured arms from the US and Saudi ending up in extremists' hands, arms supplied by funding from Saudi extremists with Saudi laws against such funding not really being enforced at all, Daesh sympathisers in Pakistan and Afghanistan obtaining US surplus from the black market in Quetta and Peshawar...

And then there is the money to be made from the global arms marketplace that supplies the "good guys", but war has always been great for business.

6. There has been some good and responsible reporting on the events in Paris amid the bloody awful reporting. Tragically, Sky News word-puker Kay Burley tweeting a picture of a dog with the words "sadness in his eyes" was not even the daftest thing she did this weekend. She also asked someone lining up to give blood why they were giving blood. Merde, I dunno, Kay. Because they were really looking forward to the banana afterwards?

7. The relentlessly hungry beast that is 24/7 news coverage has given rise to some awful journalism, in particular on the issue of passports found at the scene. Most distressing was an Egyptian passport found at the Stade de France that some reporters were quick to link to the terrorists, except it turned out to belong to a spectator who is currently critically injured. Unfortunately, the nonstop model of news means that being first tends to take precedence over being accurate.

8. Andrew Marr got it so wrong this morning on BBC when he said that Paris is the only story today. No. It is not. There are other ongoing stories that have a Paris terror angle, such as the government's rush to pass the snoopers' charter even though such powers proved ineffective in France this weekend, what impact cuts to police, the military, and the NHS will have if a similar attack happens in the UK, and the refugee crisis. But even so, there are still other stories both in the UK and abroad that still need to be reported and it would have been good to see coverage of other news especially when the news channels inevitably started repeating themselves and news tickers remained unchanged for hours.

Amol Rajan, who often makes sense, described 9/11 on Marr's programme as an attack on capitalism. No. It was not. The twin towers were an easy target for amateur pilots. It was an attack on so much more than that. Equally, Bono describing the attack on the Eagles of Death Metal concert in Paris as an attack of music was head-up-the-arse nonsense of the highest order.

9. Despite what you may be seeing, hearing and reading in mainstream media sources, there are plenty of brilliant journalists out there who are working tirelessly to cover stories other than Paris. Lebanon, Yemen, Burma, Iraq, South Sudan, Kenya, the list goes on of places where newsworthy events are taking place. Despite what many a moaner says, other stories are being reported - but you might have to actually do some damn research and find some alternative news sources or recognise that it was covered in mainstream news outlets but you might not have bothered to pay attention. Additionally, local and regional news sources are often easily found online - and when you do find these stories, share the hell out of them. In this free market world of news, consumers have the power to give all manner of news the airplay it deserves.

10. An interesting quote from Richard Dawkins that sprung up this weekend deserves more analysis: "They're the ones who don't take their religion seriously." He was referring to the religious people, in particular Catholics and Muslims, who he deems to be "good". My instinctive interpretation of "not taking religion seriously" is to refer to the people who happily identify with a particular religion but don't follow every single example of their faith's book to the letter.

They are, for example, the Muslims who drink alcohol, the Muslims and Christians who have sex outside of marriage or blaspheme when they're angry or surprised, the people who may indeed have conservative attitudes to issues such as homosexuality but do not believe that execution is an appropriate punishment despite some of the more startling passages from their holy books, the people who may indeed be offended at jokes at the expense of their faith but do not seek to kill or even arrest anyone over such humour.

The phrase "don't take their religion seriously" is a glib soundbite but my broader interpretation probably encompasses more religious people than we realise, even those who may bristle at being described in that manner. It strikes me as a lazy shorthand term for moderate religious people but, in my experience, moderates are actually the majority. It's just that moderate voices, especially in the wake of terror attacks, are seldom heard. Noisy idiots, such as Anjem Choudry, end up getting airplay as representing entire faiths and all this achieves is a recruitment drive for Daesh.