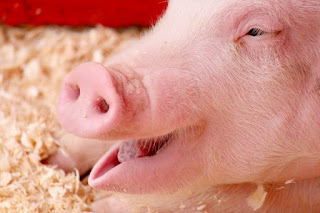 I can't lie. Like most of Britain this morning, I gasped and laughed when I first heard the astounding claim that David Cameron inserted his penis into the mouth of a dead pig in some initiation ritual during his days at Oxford. I can never resist a pun and I found myself in a piggy pun vortex with friends on Facebook. The shots were cheap but we all needed a good laugh, joking as I was with friends who regularly roll their eyes at the sorry state of British politics. I freely admit my own hypocrisy here.

But now the time has come to analyse this situation a little more soberly, even as "Get Piggy With It" remains my earworm. I usually reserve the conspiracy theories for the likes of Pamela Geller and David Icke, but the timing of the Daily Mail breaking this story in the form of extracts from Call Me Dave, a book by the sour-grape-laden Lord Ashcroft and ex-Murdoch journalist Isabel Oakeshott is curious to say the least.

Just last week, the Daily Mail, along with the usual media suspects, was busy writing reports on Jeremy Corbyn that had very little to do with policy. Corbyn should be as open to policy scrutiny as any other party leader, but some of the crap in the media last week was ridiculous. Most absurd of all was the Daily Express exposing Corbyn's great-great grandfather as a workhouse boss. What next? Corbyn's caveman ancestors beat their wives with clubs?

By splashing the "bizarre initiation ritual" story across the front page, the Daily Mail was effectively flying the false balance flag. "Hey, look! We can slag out the left and the right! We are equal opportunity sex scandal peddlers!", they may as well be yelling from the rooftop at Northcliffe House.

It's funny how this story breaks just as some real news was starting to seep through the cracks of mediocrity. People were actually talking about cuts to free school meals and cuts to junior doctors' salaries. Some were even embracing a less circus-like approach to parliamentary debate.

It suits the Mail's agenda to have Britain laughing at #piggate and we've all pretty much fallen for it, hook, line and sinker.

And it's not just the fact that the story broke after a week of Corbyn-bashing that is pertinent. This story has broken during the week Parliament goes into recess because it's party conference time again. The Twitters got all excited about the prospect of MPs oinking at this week's Prime Minister's question time (wow, that's the kind of mature debate we need...) or subtle porcine references being slipped in to the questions.

So then people were deflated when they realised PMQs is not on again until October 12. That is more than enough time for this to blow over, for us to be distracted by something new and stupid, for the party conference season to throw up more stories, many of which will invariably be personal attacks rather than policy criticism. Woe betide the MP who attempts to crack a joke or tests out a daft new haircut.

And it is plenty of time for important issues to be swept aside because the likes of the Daily Mail don't actually want us to talk about them. I'm not sure if I am enough of a conspiracy theorist to believe David Cameron knew about this in advance but it has probably done him a perverse favour. And Toby Young will no doubt benefit one way or another by taking one for the team as the only Tory to stick his head above the parapet today to defend Cameron.

Anyone thinking of wearing a pig mask and oinking outside outside the Conservative party conference in Manchester the week after next is part of the problem.