UKIP and the man behind the green door: The sequel 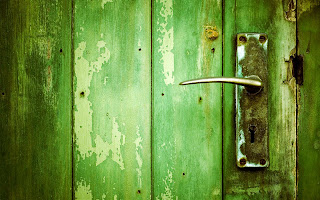 Last week, I wrote about the man down the road from my house. The man who has a UKIP poster in his window. About how I wondered who might live in that house. And then I wondered no more when I found him collapsed in his doorway, a 91-year-old man who immigrated to the UK from Poland after WWII. I didn't demand to know why he had a UKIP poster. I called an ambulance while two visiting builders helped him to the sofa. He is still in hospital - the bump on the head was as serious as it looked and he was rattling with multiple medications for multiple conditions. It is a sad situation but he is in good hands at St Helier Hospital.

I was forced to confront my own prejudices and assumptions. I admit I was fully expecting a middle-aged man, born in the UK, to be living there. I could not have been more wrong and I acknowledged that. The man's need for medical care was far greater than my need to ask why he plans to vote UKIP next May. There is nothing to be gained by me picking an argument with a vulnerable widower.

Yet still assorted UKIP supporters appeared in my Twitter feed and called me an ageist lefty bigot. They are entitled to form that view of me. What was ironic was a few of them then proceeded to make assumptions about me - they all assumed I get all my news from the Guardian. I do not. And they all assumed I was a Labour party supporter. I am not. I seriously have no idea where my cross will go at next year's election. One genius decided to include Ed Miliband and Ed Balls in the tweets he sent at me.

But what was interesting about the Twitter conversations was the bizarre way UKIP supporters try to defend UKIP's NHS policy.

They were all keen to tell me that UKIP is all about keeping the NHS free at point of use. This would be fine if one of UKIP's policies wasn't compulsory, government-approved private health insurance for all immigrants for the first five years of their time in the UK. Only once an immigrant has paid both tax and private health insurance for five years would they then have the same standing in the NHS as a British-born person who has never had a job or a British-born convicted criminal, neither of whom are under any obligation to contribute to the system for any period of time.

There was no real answer from anyone from UKIP on this one. And as soon as I point out that scapegoating immigrants won't save the NHS when the system is buckling under the pressures of PFI loans and the outrageous cost of the tender process within the NHS - estimates vary between £3b and £10b per year but Jeremy Hunt isn't going to give us exact figures - then they disappear from the conversation. UKIP has no policies on reforming the marketised NHS and its policy on buying back PFI loans is entirely uncosted.

But what is even more curious about discussing the NHS with UKIP supporters is how they are quick to acknowledge the NHS policy is flawed. I even had one agree with me that their NHS policy is full of holes. And another one was moved to blog about my blog post last week and admitted that "UKIP doesn't have a particularly strong policy on the NHS, other than to keep it free at point of use, whatever that takes." See the three paragraphs above as to why that is a pretty pitiful excuse for healthcare policy and one that does not move me to vote UKIP.

And curiouser and curiouser, I've never had a UKIP supporter quote their Dear Leader, Nigel Farage, when it comes to the NHS. This is hardly surprising. Farage did not do a damn thing when his deputy, Paul Nuttall, congratulating the current government for bringing a "whiff of privatisation" to the NHS and has been caught on camera supporting an insurance-based system. Are his supporters embarrassed by him or do they know they are not going to convince anyone by quoting their leader?

We should not be surprised by any of this. In the past four years, there have been so many changes to their NHS policy, it is hard to keep up. And some of their policies, such as the duty on all NHS staff to report low standards of care and the requirement for foreign health service professionals to speak an acceptable standard of English, are already in place. But they are policies that sound good to people who don't know any better and aren't about to do any research.

It is a party of cheap populism, of blowing with the wind, of making it up as they go along depending on what they think might garner support and make headlines. It has nothing to do with what is good for the country and its people. UKIP is a party that once had compulsory uniforms for taxi drivers as a policy on its website. People rightly mocked that one. It vanished. If anything that is currently on the UKIP website is mocked too loudly, that will probably vanish from cyberspace too.

The funny thing is I have met UKIP supporters in person and they were pleasant, friendly people. I met four last Friday night at a screening of Sell-Off, a film about the threats to the NHS such as PFI, vested interests, TTIP and the cost of the tender process. They were stunned into silence and I can only hope they came away from the screening knowing that immigrants are not the problem here. But whether UKIP policy will reflect that is another matter entirely.
Posted by Georgia Lewis at 11:06