The great NHS game of whack-a-mole... 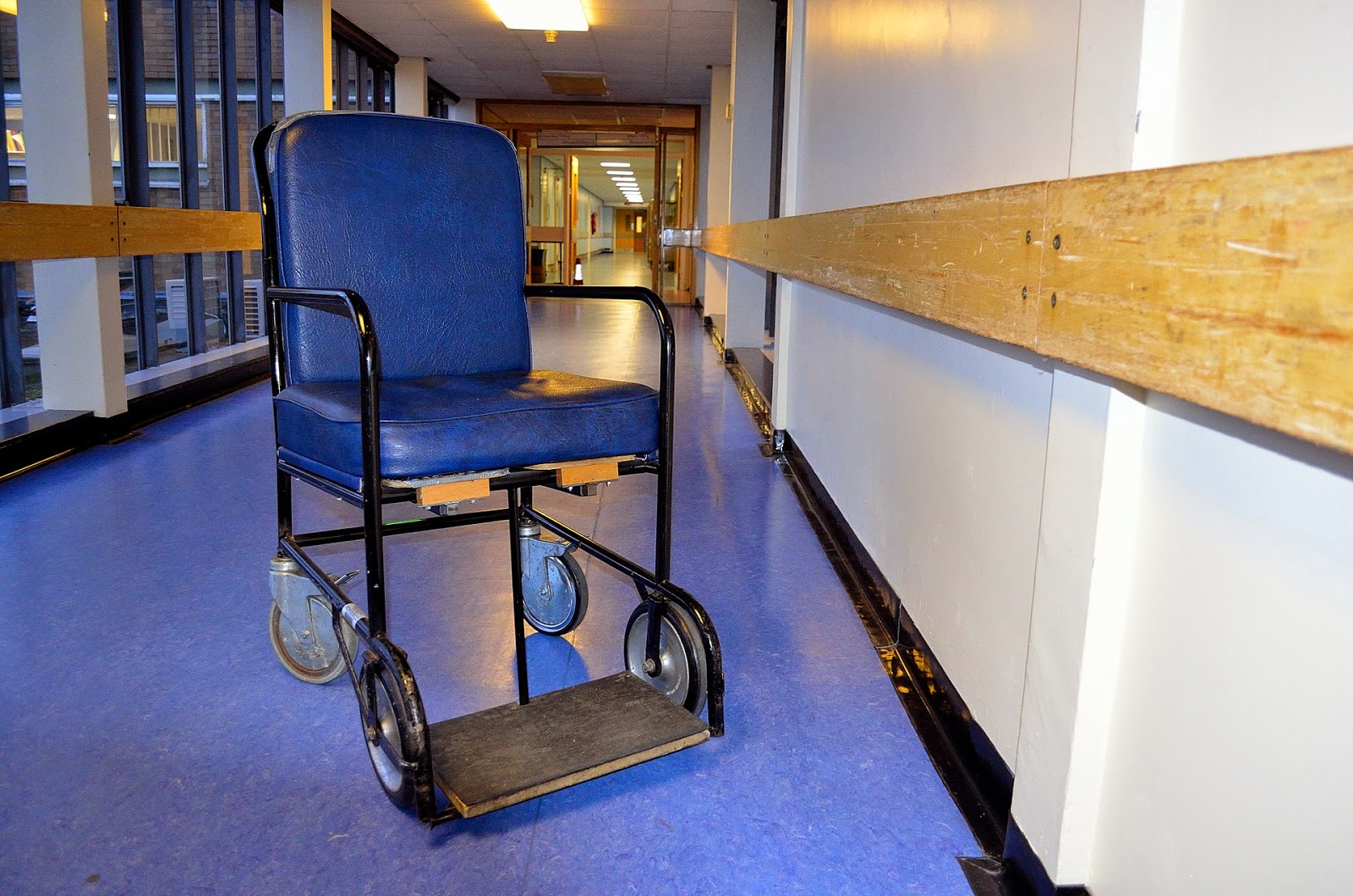 Yesterday was a somewhat astounding day. I'd been interviewed by the Sutton Guardian as part of a campaign I am involved in to keep the services of St Helier Hospital, a hospital which has been serving my community since 1938. A local Liberal Democrat MP, Tom Brake, blocked the Twitter account, @Save_St_Helier, which I manage as part of the campaign. Apparently, this strategy seemed like a more reasonable course of action for Brake in lieu of answering our questions about his online petition and his voting record in the House of Commons.

The media loves a good Twitter spat these days and the Sutton Guardian ran an article with a rather unfortunate headline - a throwaway line I'd uttered in which I likened Brake's behaviour to that of a schoolgirl became the lead. Cue an angry mob who clearly wanted to burn me as a sexist witch. Sigh... Thankfully, there are enough sensible people out there who joined in the comments at the end of the article and were able to steer the discussion back to real issues about Brake's lack of accountability.

I spent a lot of yesterday regretting that I'd put my mouth into gear before engaging my brain but I certainly do not regret calling out Tom Brake on his avoidance of perfectly reasonable questions. And, frankly, if me likening him to a schoolgirl is enough to get open, uncensored conversations happening about the questions he refuses to answer properly and publicly then so be it.

Brake has been running his online save-the-hospital petition for such a long time now that it is addressed to a group that now has a new name but he hasn't updated it. Brake has not answered our questions about exactly who will receive the petition, when this might happen, where it might happen or what he does with the data of people who have signed in good faith.

Likewise, he has not explained why he believes voting for the Health and Social Care Act 2012 or Clause 119, both of which have led to St Helier Hospital's services being under threat as part of the top-down reorganisation of the NHS which represents yet another broken election promise by David Cameron.

If you truly believe that a Conservative-led coalition is a win for smaller government and less bureaucracy, you are deluded - the NHS is now more bureaucratic than ever and, as a result, my tireless but tired band of campaigners in South West London are fighting to make people aware of Clinical Commissioning Groups (CCGs), because they hold the aces here when it comes to closing or downgrading services such as A&E, maternity, renal and children's intensive care.

It is really damn hard to make people concerned about CCGs and the powers they have.

And trying to get straight answers out of CCGs, not to mention hospital trusts, about our services and how they are spending/wasting our money is frequently akin to getting blood from a stone. And then there is the challenge of trying to distill the information they put out into plain English so we can raise awareness as to what is going on.

Then there is the narrative of austerity - that the only way we can afford the NHS is to make cuts - and, in the meantime, hospitals are being run into the ground. Your local hospital may not be cleaned as often or as thoroughly as it was before because cleaning contracts have been outsourced to companies that are more concerned with making a profit than preventing MRSA outbreaks. You may not be served by nurses who work full-time at your local hospital because they may have been supplied by agencies. And, even when staff are working hard and trying their best, they may be overstretched.

And then people complain. They don't necessarily complain via the official channels because these days many people would much rather just whine on social media instead. And in the meantime, it creates a public appetite for closing hospitals. Or merely apathy. And apathy is all that is required for essential services to be slashed without resistance.

You might not notice at first. But the system is being chipped away. The easiest way to do this - and for government to wash their hands of accountability - is to outsource services to the private sector. This has led to the awful G4S - the company whose attempt to run security at the 2012 Olympics was embarrassing and led to thousands of British Army soldiers being drafted - nabbing millions of pounds worth of NHS contracts. After the G4S Olympics debacle, I have no idea why this company would be trusted to run a pub raffle, let alone anything as important as healthcare services. Indeed, G4S is running the non-emergency ambulance service at St Helier Hospital and this has already led to an unnecessary death.

And private companies are exempt from Freedom of Information requests, so this adds another brick wall for anyone trying to find out how our money is being spent.

The CCGs in my end of London used the services 20/20 Delivery, a consultancy firm, when they were involved in the wasteful Better Service, Better Value (BSBV) review of local healthcare provision. BSBV cost taxpayers at least £8m and more than £1m went to 20/20 Delivery but when I tried to find out exactly what 20/20 Delivery did that cost so much public money, I could not get any answers.

Congratulations if you've read this far. Are you wondering why I am telling you all this if you don't live anywhere near St Helier Hospital? It is because the same story of CCGs proposing cuts and downgrades is probably happening near you too.

I have been in touch with other campaigning groups across the country and the same stories keep cropping up - unaccountable CCGs, childish Twitter blocking, very real threats to cut A&E and maternity services, cuts that will result in people spending longer in ambulances, cuts that will result in women in labour having to travel further to give birth, services being outsourced to substandard private companies, private companies that make political donations winning contracts, private companies in which either politicians or CCG members have vested interests winning contracts...

Across the country, campaigners are dealing with the same convoluted mountain of nonsense - it is deliberately convoluted because the powers-that-be do not want people to be aware of what is happening. It can be hard to know where to direct your wrath when the Health Secretary is a remote figure in Whitehall, unless the failed marmalade entrepreneur decides to activate Clause 119 and close your local hospital within 40 days.

It is a giant game of whack-a-mole and it is being played with our health services.

Then there is the big distraction of health tourism outrage. It makes for lovely Daily Mail headlines even though it only costs 0.06% of the total NHS budget. Sure, there is a case for ensuring people who are not entitled to NHS care pay for it but some perspective is needed.

And as long as the health tourism drum is beaten on front pages as if there is a queue of illegal immigrants demanding free breast implants at every hospital, that takes the focus off the real financial drain on the NHS - PFI contracts. These Private Finance Initiative contracts were introduced under John Major, their inking went nuclear under Tony Blair and Gordon Brown and the current government is in no rush to stop them being signed. These result in the public footing the bill for one hospital for the price of many, over and over again, across the country. This, in turn, renders PFI hospitals too big to fail and other nearby hospitals end up facing cuts.  A full public inquiry into these rotten contracts is the only way forward here. Do we dare to dream of this appearing in the manifesto of any of the major parties?

But I suspect the powers-that-be know that it is hard to maintain the energy for campaigners to fight for their local services while maintaining the rage about the bigger, wider issues, such as expensive PFI contracts. The little battle going on in my backyard is one of many across the country and those who are still raging that I likened Tom Brake to a schoolgirl need to get a grip. There are bigger fish to fry and if Tom Brake's apologists cannot see that he is trying to stop the fish even making it to the pan in the first place, we are going to lose vital services.


Photography by George Hodan
Posted by Georgia Lewis at 14:22