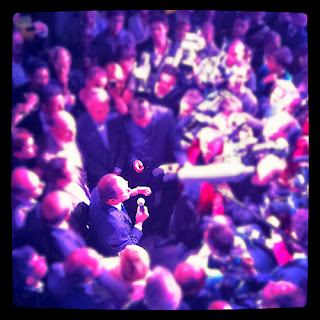 Well, that was a bit of an anti-climax, wasn't it? After the media waited all day yesterday for a statement by French president Francois Hollande about his alleged affair with actress Julie Gayet, he was dignified at the press conference to the point of being a bit dull. If people wanted a bald-faced, Bill Clinton-style "I did not have sexual relations with that woman" showstopper, they probably left disappointed.


He said: "Each of us on our personal lives can go through difficult periods and that's our case ... this is a painful time ... But private matters should be dealt with privately and this is neither the time nor the place to do so."

France's opposition UMP party has accused the president of taking security risks. The UMP leader said: "The president is not a normal citizen during his term. He is the chief of our armies. He is the keystone of our institutions. His protection should not suffer from any amateurism ... The president should be aware of the level of responsibility that he exercises, be aware that his role is greater than his person, and be aware that he incarnates the image of France in the eyes of the world."

Hollande responded to Jacob's accusation by saying: "My security is assured everywhere, and at any moment. When I travel officially ... and when I travel on a private basis, I have protection that is less suffocating. But I am protected everywhere."

"On a private basis" is the important part. If Hollande was visiting his mistress with a discreet level of security at the French taxpayer's expense, that's no different to him visiting anyone for whatever purpose with "less suffocating" protection. Jacob might not approve of Hollande visiting a mistress (as alleged by that pillar of quality journalism, Closer magazine...) but if he approves of Hollande having publicly funded security at all times, where does he draw the line at what activities are acceptable for the president to do off duty?

Then we have the additional sideshow of Valerie Trierweiler, Hollande's partner, being hospitalised for shock. Trierweiler has been accused of attention-seeking by going to hospital and of enjoying the perks of being First Lady a bit too much. The position of First Lady in France is not an official one but in practice, she (for France has never had a female president) gets an office in the presidential palace and a small staff.

Now this is under scrutiny, largely because Trierweiler and Hollande are not married. As if being married somehow makes for a better calibre of person in public office. As if being married is the same as never having an affair. There is some rather grim glee being expressed about Trierweiler's predicament and a lot of the vitriol is coming from women.

"Well, he left someone else for her so what did she expect?" is the superior and sneering tone of the slut-shaming nonsense. Never mind that plenty of people leave their partners for other people and live happily ever after with the "other woman" (or man). Never mind that Trierweiler is a human being who may have sincerely believed Hollande was going to be faithful to her. Never mind that people who have led inevitably flawed lives themselves are sitting in joyous judgement of a private situation.

"How the hell is Hollande pulling these attractive women?" is the other sneer that is echoing around the world. I dunno. Maybe he behind closed doors he is interesting, witty, charming, makes women feel special. Maybe he has a tongue like an electric eel. Again, I dunno. From a man, this sounds jealous. From a woman, it sounds naive. From both men and women, it is completely juvenile to take the "Eeeeuuuwww! Gross!" line of unevolved thought.

The UMP is playing this clumsily while Hollande has schooled every world leader in how to handle a press conference about a sex scandal. Hilariously, since the story broke, Hollande has enjoyed a rise in the, ahem, polls. A survey by Le Nouvel Observateur magazine found that between last month and this month, his approval among women is up from 23% to 26% and up to 72% from 69% among men.

So maybe, as I suspect, French people just don't give a damn about Hollande's private life. Maybe women are happy with the new laws he has proposed on workplace equality and in relation to combating violence against women. Maybe men like this too. Maybe everyone is happy with slightly improved employment news. This is despite a stagnant economy and a counter-productive 75% top level of taxation. The UMP could be getting plenty of mileage from that if they weren't obsessed with making a big deal out of an alleged affair as reported by a rather dreadful magazine.

And in the midst of the noise, the only remotely productive thing to come out of this sorry, miserable mess is a chance to rethink the role of the French First Lady. I have in the past mused on what First Ladies are even for and I still maintain it is a bizarre position which imposes ridiculous limits on women.

Is this the catalyst for France to think about what taxpayer-funded perks their First Lady should have? Maybe. But whether she is married to the President or not is completely irrelevant and nobody's business.  Hollande's sex life and how he and Trierweiler deal with what Hollande described himself as a "difficult period" are also nobody's business. And if Hollande did put a ring on it, Trierweiler would still be getting the same office and staff. He is not breaking any laws by living with a woman to whom he is not married or by leaving Segolene Royale for Trierweiler. He was more than happy to have her by his side for the presidential campaign. They didn't just meet at the bus stop the day before the election. They are not having a casual fling.

So, by all means, have a serious discussion about what French taxpayers are happy to fund when it comes to First Lady perks. But when it comes to Hollande's sex life, get over it and get over yourselves while you're at it.


Image by photogreuhphies
Posted by Georgia Lewis at 11:29