In defence of Miley Cyrus 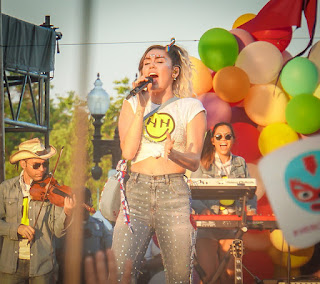 If I was Miley Cyrus' mother, I'd be proud of how my daughter turned out. Of course, this would also mean that I had sex with Billy Ray Cyrus in 1992, which my 16-year-old self would find hilarious, but I digress.

Miley has turned out well.

The criticism levelled at her is usually sexist or prudish or both. As far as her detractors are concerned, she commits the heinous crimes of dancing in possession of an arse and having the temerity to wear clothes that are too short or too tight or too midriff-baring. Her Christmas appearance on The Tonight Show, in which she sang a feminist re-working of Santa Baby, predictably outraged anyone who thinks women are taking over all the men's things for the purposes of establishing an evil gynaecocracy - or anyone who is permanently outraged about even the slightest display of female flesh.

Good on Miley for speaking up for all women with a smart song that deservedly went viral - equal pay for equal work, not being sexually harassed at work, not having to put up with men sending unsolicited dick pics, being financially able to take care of yourself without relying on a man - these are issues that resonate with women everywhere.

Of course, her path to becoming an intelligent 26-year-old woman with a grown-up career was not a seamless transition from her child star days. When she was twerking at Robin Thicke to the frankly repulsive, if annoyingly catchy, song Blurred Lines at the 2013 MTV Video Music Awards,  it was not a career highlight. But it was nearly six years ago and since then, she has spoken out about how she felt conflicted by it all - on one hand, she wanted to make a statement about female sexual freedom but on the other hand, she says that overtly sexualised dance moves were expected of her and it seems that she was not entirely comfortable with it at the time.

Twerking in front of a creepy man in a crap suit and a global audience of millions is a specific situation that not every 20-year-old experiences, but it is hardly rare for a 20-year-old woman to do something sexual that she later looks back on with regret or makes her wish she exercised more agency at the time. It's just that when most of us are being ridiculous 20-year-olds, our collective ridiculousness does not end up on front pages or become a subject for national debate.

I am glad that when I was 20, I had the freedom to figure out who the hell I was and the worst consequence was risking becoming the topic of small-town gossip in rural Australia - although the damage that can be done to people's lives when someone becomes the subject of gossip cannot be underestimated. That is not something unique to this online era but the risk of going viral certainly magnifies things.

Miley Cyrus has moved on, grown up and ultimately made a good transition from child star to adulthood. She shot to fame as Hannah Montana in the eponymous TV show in which she played a girl with a double life - high school student by day and pop star by night - it was fun, it was cute and Hannah's character was funny, smart and, even with the pop career, still relatable. Having the excellent Dolly Parton as a godmother can't have hurt her development either - indeed, Miley's cover of her godmother's hit, "Jolene" is absolutely gorgeous. She has a great set of pipes and real talent should always be encouraged in this world of mediocrity.

The fact that Miley Cyrus has come out the other end of the child star sausage factory sane, stable, alive and not plagued by any number of awful problems that have either killed former child stars prematurely or led them into a lost adulthood, particularly if the cuteness is replaced by ordinariness post-puberty, should be celebrated.

I would much rather those who slag off Miley Cyrus, especially those who claim to be feminists, reserved their ire for genuine oppressors of women. In 2019, there are still plenty of things to be angry about and none of them involve cutting down a talented young woman.


Photography by Ted Eytan/Flickr
Posted by Georgia Lewis at 06:10