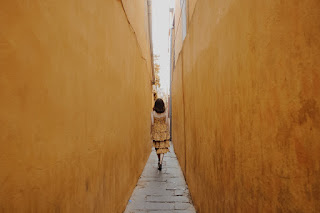 Phuket, 1998. I was 22. I had about $1,000 in credit with a Sydney travel agency after I cancelled a trip to spend Christmas 1997 in Japan. Naturally, there was a bloke involved in that particular debacle. When I was back at work in the new year, feeling more feisty than heartbroken, my boss told me I had "way too much annual leave owing" and asked if I could take a week's leave soon. How dare I save it all up to take a long trip later that year, eh?

"Fine!" I said with all the breeziness I could muster. "I'll be on the beach in Thailand next week."

My boss made a noise like Henry Crun and said: "Oh, I didn't mean quite so soon...".

I knew my rights so I went to the travel agent after work and used the credit to pay for a week in Phuket, one of those rite-of-passage places for young Australians. I was on a plane within days of the ridiculous conversation with my boss.

None of my friends could get the time off work at such short notice or they were short on funds, so I buggered off for a week by myself. I rode an elephant, saw some alarming monkey-based entertainment, posed for a photograph with a snake coiled around my legs and shoulders, bought myself awful pink sapphire earrings that made my earlobes look infected, drank beer with some friendly Irish lads, got into an argument over a sunlounger on the beach after being told I'd paid the wrong person, the usual holiday fun...

In the middle of the week, I met two young Swedish men over breakfast at the hotel. They were hiring motorbikes to go to Karong Beach and asked me if I'd like to join them. Sami looked like a bulkier version of Russell Crowe in Romper Stomper but seemed very sweet and Ari was blonde and cartoonishly muscle-bound like Johnny Bravo and seemed rather sure of himself. Within half an hour, we were careening around a winding road on motorbikes. No helmets because it was the age of invincibility that everyone should experience in their 20s. I was on the back of Ari's bike, clinging for dear life. I took a peek over his shoulder and realised the speedometer was broken, stuck on zero.

"How fast are we going?" I yelled over the wind rushing into my face.

"Who cares?" he replied. And I didn't particularly care.

The three of us spent the day on the beach, which was uneventful until a sea creature stung me and my pallid chest and bikini-exposed abdomen briefly erupted in red spots. The lifeguard had some potion which calmed the rash down and then we were back on the bikes in search of a bar.

When one of the bikes broke down, Sami and Ari abandoned both bikes by the roadside and we walked to a bar. A terrible Bon Jovi cover band played, the beer was watery and, after a few hours, I was bored so I made my excuses and got a tuk-tuk back to the hotel. I paid the driver and as I handed him the cash, he grabbed my face in his hands and aggressively kissed me. I snatched the money back and ran into the hotel. The concierge, a pretty young man who sported eyeliner and a long coke nail, asked me how my night was and I told him it was OK.

As I cleaned my teeth vigorously, the phone in my room rang. It was the concierge, not for the first time that week, calling my room to ask me if I wanted to join him "on my motorbike for discotheque". Every time he called, I'd politely refuse.

I'd had enough of that day so I went to bed, naked under lovely, crisp hotel sheets, and promptly fell asleep. A few hours later, I was woken up by a solid, naked man spooning me and licking my ear, his erection making inquiries around my buttocks.

It was Ari. I sat bolt upright, gathered the sheets around me like a toga and demanded to know what he was doing.

"I thought you wanted this," he said.

"No, when did I ever give you that idea?" I asked.

"If you don't get out of my room right now, I will scream so fucking loudly, the whole hotel will hear."

And with that, he gathered up his clothes from the floor and left. I will never know if he had assistance in accessing my room or whether I simply forgot to lock the door or didn't lock it properly.

It could have been so much more horrific. The result of the whole sorry situation was four days of awkward breakfasts at the hotel before I flew back to Sydney. I weighed about seven stone back then. It would not have taken much for Ari to pin me down and rape me or worse.

When the horrific news about the murder in New Zealand of Grace Millane broke, it was chilling. Like me, on holiday alone in Thailand, she was just 22. Some news stories feel personal. It could have been me in the news in 1998 if Ari decided to proceed. And you can guarantee that there would be assorted trolls blaming me for the crimes, just as a disgusting cabal have in response to Grace Millane's murder.

Indeed, there are probably people reading my account of the events in Phuket from 20 years ago and tutting at me for having the temerity to go to Thailand by myself or to agree to ride on motorbikes with men I'd just met in the hotel or to wear a bikini or to have a few watered-down beers or to jump in a tuk-tuk alone. I can just see these judgemental, joyless prigs going over my story like a hate-filled editor, drawing lines through my words with a blue pencil of sexist fury.

Nothing much has changed since 1998, except for the addition of Tinder and social media as a way of meeting people, which has given those vile cretins who blame anyone but murderers or rapists for murders and rapes a new way to tell women that they were asking for it.

Jacinta Ardern, the prime minister of New Zealand was right. Grace should have been safe in New Zealand. Her statement was one of immense decency and it should ring out whenever a woman is not safe on her travels. As Grace Millane's devastating story ebbs and flows in and out of the news cycle with the arrest and forthcoming trial of the accused, the sickening news broke that two women had their throats cut in Morocco. A suspect has been arrested for the murders of Louisa Vesterager Jespersen, a 24-year-old from Denmark, and Maren Ueland, a 28-year-old from Norway, and police are investigating more people.

Grace, Louisa and Maren should never be forgotten. But their legacy should not be an end to women travelling the world.

Since my Thailand trip, I've had assorted adventures, sometimes alone, sometimes accompanied, all over the world - Turkey, Greece, Vietnam, Cambodia, South Africa, Laos, Ghana and Nepal are just a few places that spring to mind when I think of travel anecdotes best told over a beer.

Over the decades, I've found myself in situations that might scare some people into burning their passports but what would be the point of that? In a perfect world, Grace, Louisa and Maren would have come home from their travels full of stories, they might have gone on to see more of the world, they would have lived long, fulfilled, happy lives.

But life isn't always that good to people. And the sad, depressing reality is that staying at home won't guarantee any woman's safety. Across the world, girls and women are killed in their own homes or their own towns and it is often by someone known to them, someone they thought they could trust.

"Doing the right things", whatever the hell that means, to prevent your untimely demise while travelling is no guarantee of safety either. I will happily offer advice about staying as safe as you can, based on my experiences travelling the world, especially when someone is apprehensive about going somewhere for the first time. But I would never tell anyone, male or female, not to travel.

The rewards of travelling far outweigh the risks. Not everyone will come home safely. But when the act of coming home is a risk for so many, you may as well take your chances with a suitcase and a passport because being scared of the world is no way to honour the memories of Grace, Louisa and Maren.

Photo by Dương Nhân from Pexels
Posted by Georgia Lewis at 06:44