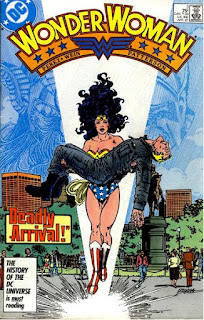 I spent International Women's Day flying from Abu Dhabi to London, The simplistic metaphor for that journey is that I flew from a backwards, sexist society to a place where women are free. But it's not that simple.

Theresa May might have won the exchange during Prime Ministers's questions in which she was able to accuse Jeremy Corbyn of mansplaining feminism when he asked her about meeting Saudi's Crown Prince Mohammad bin Salman on International Women's Day, but let's be realistic. For all Theresa May's bragging about being a female PM meeting the Saudi Crown Prince and challenging him on human rights, only the terminally naive believe that her meeting yesterday will make a difference to women.

Britain will still sell weapons to Saudi Arabia and these will be used in Yemen, a truly appalling place for women. The bombardment of Yemen is pushing the impoverished country even further backwards, doing nothing to empower Yemeni women. Just 55% of women aged 15 and above in Yemen can read and write. This is a country where a woman who was campaigning to improve female literacy rates was shot dead last year.

I was in Abu Dhabi covering a security conference, before drafting this blog post in longhand on the flight home. At the conference, I led an all-women editorial team representing Australia, Britain, India and Slovakia. We covered the news from a male-dominated industry event where female speakers were scarce.

But then there are terrible similarities for women in the UAE and Britain, with serious issues in regard to how rape cases are dealt with by justice systems. Rapes are certainly under-reported in both countries. In the UAE this is often because victims are worried that if the defendant is acquitted, she could face adultery charges for consensual sex with a man to whom she is not married. In the UK, many rapes are not reported for fear of a truly appalling experience at the hands of the system. Here, it is a place where women are, with depressing frequency, made to feel as if they were asking for it, for daring to walk alone at night, dress a certain way, drink alcohol, go on a date, be in a relationship, not be a blushing virgin and so on.

Neither country's situation is acceptable. This is not an either/or thing. The issue of justice for rape victims is a genuinely international issue that affects women all over the world. And there is the crux of International Women's Day. It's a day for girls and women across the whole world. The clue is in the name.

International Women's Day is not a day for sneering mansplainers to tell western women that we should shut up and be grateful that we are not under bombardment in Yemen, enslaved by Daesh in Syria, restricted by the guardianship system in Saudi Arabia or risking being kidnapped by Boko Haram in Nigeria or threatened with the horrors of female genital mutilation.

And we are doing this. We are angry. We are not going to be sidelined because of our biology. We are not going away. We will not be quiet. We will fight our battles great and small. We will celebrate our victories. And it won't just be on International Women's Day. This happens every day in every country in the world. Deal with it, sexists. This is our time.