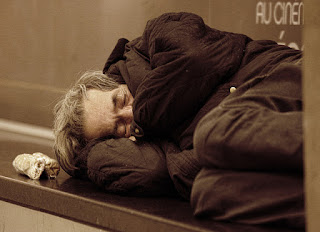 "I woke up and I was covered in snow," Tony told me with startling cheer last night.

We chatted about his attempt to get his foundation for lifting people out of poverty and exclusion, The Outcast Foundation, up and running, about the farce of how he almost had free office space courtesy of Landsec until he was deemed too homeless.

Tony is the guy who sells me The Big Issue at Victoria Station each week. Like Big Issue Bill, from whom I used to buy the magazine, atoning for my hungover sins on many a blindingly sunny Sydney morning, I've started chatting with Tony. The stories of vendors are frequently moving and inspiring and Tony's story is no exception.

So it's an absolute travesty that he should have woken up on Sunday morning covered in snow.

Meanwhile, barely half an hour after I bid Tony good night, I was on the bus from the tube station to my house fruitlessly poking away at my phone screen in a state of irritation. I was trying to turn on the heating via an app. I couldn't connect to the internet and had to endure the hell of coming home and then turning on the heating via a switch on the wall just inside the front door.

I had to remind myself that I have never woken up covered in snow.

And for the too-many people who have woken up covered in snow this week, the reasons, the chain of events which lead to people not waking up in warm beds, underneath roofs, surrounded by solid walls, with the central heating set to switch on before the alarm goes off, are complex.

For some people, such as Tony, the attempts at assistance from well-meaning charities can be more of a hindrance than a help.

For some people, they know there is a door somewhere out there that will always open for them but there are other issues at play, such as mental illness, which lead to sleeping rough. And this is the situation for a dear friend of mine as I write this, safely indoors, with the heating turned on.

To understand life in the mind of someone with a mental illness is a challenge for those who are not in this uniquely pernicious pain. To voluntarily be homeless, as my friend currently is, to leave a warm home where loved ones await can seem like an almost offensive rebellion, an act of profound ingratitude. And on a purely academic level, maybe it is. But mental illness is not rational. It produces irrational responses and behaviours that don't always make sense and can be genuinely terrifying to the patient and to the people they love and who love them, even when their situation is bleak.

And that is my fear for my friend who has again abandoned a roof over his head, who has been known to sleep in the gardens and garages of friends and family, who has taken up residence in woodlands and in the parks and shop doorways of London.

Too many times I have spoken to him or had an online chat with him and feared that it would be the last time I would ever see him or hear his voice or see his words pop up on my phone or computer screen. He is a brilliant writer, a wonderful raconteur, when he is at his best, he is the funniest, most entertaining person in the room.

He wrote a piece for me only a few weeks ago and it was excellent - it was insightful, there was not a cliche to be found, it was everything I wanted for that particular commission. I barely changed a thing, just a couple of typos. If only every writer whom I edit could consistently file such sparkling copy. It was a joy to edit his work, it was a joy to process the invoice.

Richard, once again, I ask you to come home, to follow the treatment that is on offer, to sleep in a warm, clean bed and not cause your family sleepless nights.

I have given three eulogies in my time - my paternal grandparents and a godmother all died within two years of each other and Dad and I somehow found ourselves appointed the family funeral orators. As far as I can tell, my eulogies were well-received. But they were written about people who died aged 89, 91 and 86. They were long lives well lived.

Richard, I have had horrific dreams about giving your eulogy. As much as I like the sound of my own voice, I don't want to give your eulogy any time soon. We are doing our best to understand why you are currently at the mercy of what is already a biting British winter. And we are all hoping for that day when nobody wakes up covered in snow. 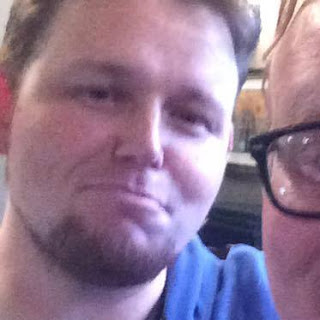 This is Richard. Please keep an eye out for him in central London and Hertfordshire

Photography by Karim Corban/Flickr
Posted by Georgia Lewis at 10:31