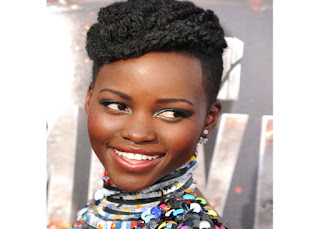 The fallout from Lupita Nyong'o publicly calling out Grazia magazine for PhotoShopping out her natural hair led - and Grazia's bizarre, responsibility-shirking non-apology - to a pretty unseemly global spectacle. Plenty of white people were quick to jump on the "This is PC gone mad! Why is everything racist?" bandwagon.

But here's the thing - when a black woman calls out something that she believes to be racist and ignorant, she is worth listening to. Her perspective is different to someone who has never experienced a day's discrimination because of skin colour.

So, with that in mind, today I am handing my blog over to Annette Walker. She shared her views on why it matters that Lupita's proudly African hair was removed from a cover photo, puts the story into historical context and explains why it's not simply a matter of political correctness going too far.

The privilege of being free from such experiences can often trivialise these micro-aggressions of racism.

To understand the relevance of Lupita's objections it helps to understand the legacy of politicalisation of Black women's bodies - including hair - from a legacy of racism against the image of African peoples. It's so deep-rooted that Caribbean and African (and many other non-white) societies reject their own image in favour of Eurocentric ideology of beauty (lighter skin, straighter hair, straighter/narrower nose - Michael Jackson's cosmetic surgery is the poster for the deep-rooted psychological impact).

Many in African and Caribbean communities struggle with the concept of thick, coarse, afro "kinky" hair as acceptable (soft, fine hair is favoured and considered "pretty"), and many afro hairstyles are considered inappropriate and unprofessional in workplaces (and schools). In contrast many non-white people often fetishise "natural" afro hair styles (the exotic other).

My older relatives often talk about how they were unable to get jobs or be seen as professional if they wore their hair in its "natural" state (canerows and plaits were undesirable styles). These instances barely scratch the surface of the legacy of racism in relation to the image of black people.

Hair fashions change, but the image of black women in fashion and media continues to be a racially political topic while racial inequality exists, whether or not it's overt or more subtle. The image of the black woman has endured centuries of injury and the legacy of this continues.

Lupita is able to use her unique privilege to highlight just a tiny aspect of this issue and while not everyone might agree with the battles she chooses to pick, it's more damaging for things to be left unchallenged.

It might seem a trivial matter that removing a ponytail was a non-racially motivated, photo-editing decision to tidy up an image but in this instance I agree with her with the wider implications. It highlights the ongoing racial undertones of the representation of beauty.

Of course it wouldn't be the same story if a white model had her ponytail removed which is exactly the point why this needs to be addressed. From experience, I've learnt that as a black woman, the way I personally chose to wear my hair has social implications far more than just a personal choice of hairstyle.

So it's good to be able to have this discussion in public because it's most often a silent battle falling on deaf ears that believe racism no longer exists.


Photography by Lilchim/Wikimedia Commons
Posted by Georgia Lewis at 09:05