The State of it all 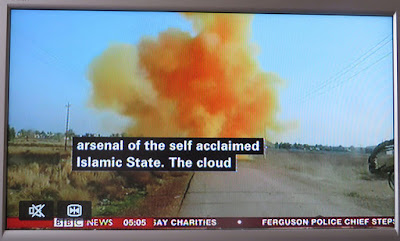 On the morning of the Parsons Green terror attack, I was not in London. Thankfully, I was safely in a long queue waiting to check in luggage and clear some pretty onerous security at the airport in Marrakech. The Parsons Green story came to my attention when I spotted it on someone's phone as we waited to have our carry-on X-rayed after our Moroccan adventures.

Morocco's security situation is a confronting one for anyone who believes that those who sacrifice liberty for security deserve neither, the context of Benjamin Franklin's quote notwithstanding.

"A pretty police state" is how my husband described it, as the bus from Marrakech to Essaouira cleared a checkpoint on a major highway. Morocco is not a democracy as we understand it in Britain - it is a constitutional monarchy where no party can win an outright majority in the 395-seat parliament. As a result, Morocco is permanently under coalition governments with the king holding ultimate power. He did give up some authority during 2011 protests but for Morocco, any Arab Spring-style activity was muted in comparison to other states across the Middle East and North Africa.

In April this year, the king managed to break a six-month post-election deadlock and agreed to the latest coalition. The election was won by the Islamist Justice and Development Party (PJD) and there were concerns about such a party having so much power, particularly among royalist. It took six months to broker a deal where PJD shares power with five other parties.

Crucially, PJD lost control of the Ministry of Justice and Public Freedoms in the new deal. This ministry had been led by Mustafa Ramid, who was an outspoken critic of the Moroccan security service when he was a lawyer and human rights activist.

While there has been much scrutiny of terrorists of Moroccan origin in Europe, extremist activity in Morocco has been seriously limited. The last major terror attack was in Marrakech in 2011 when some dickhead bombed a restaurant, killing 17 people. And prior to that, there had not been a terror attack in Morocco since 2003 when 12 delusional idiots blew themselves up in multiple locations across Casablanca, killing 33 people.

The 2003 attacks were the start of Morocco taking security measures that we look on as draconian in the west. Dozens of cells have been dismantled in Morocco, making it very difficult for would-be jihadists to operate from the North African country. The government has surveillance powers for telecommunications beyond anything that would be legal under British law.

But there have only been two terror attacks 14 years and only one attack since the security laws were beefed up. Is this an acceptable trade-off for the depletion of civil liberties? The "I have nothing to hide so why would I care if the government read my emails?" brigade would probably think so and would warmly welcome that level of scrutiny here in Britain.

In 2016, 10.3 million tourists visited Morocco and that figure is set to grow this year. The economy would not survive without tourism and Morocco has no interest in ending up in the tragic hole in which Tunisia finds itself after some pitiful bellend gunned down 38 people, mostly British citizens, in 2015.

I ask again, is it worth limiting freedoms to preserve security? Has Morocco done the right thing in order to achieve a lower body count since 2011 than the UK? Thirty-eight people in Britain have lost their lives to terrorism since 2011, compared with 17 in Morocco. With 35.28 million people in Morocco compared with 65.64 million people in the UK, there isn't a whole lot of different in the number of people killed in either country as a proportion of the population. But the frequency and events that are "not as bad as they could have been", such as Parsons Green, continue to scare people.

Of course, the incredible work that goes on behind the scenes in Britain in thwarting terrorism is never reported for obvious security reasons, whether it is high level intelligence work or stopping potentially dangerous people coming in and out of our borders.

And when citizens of either Morocco or the UK end up fighting with Daesh in Syria, the prevailing attitude in both countries seems to be "Good riddance to bad rubbish and I hope they end up dead and forgotten for there will be no virgins in heaven for them".

But what of the people who join Daesh and then want to come home again? It's pretty hard to feel any sympathy for people who would give up the relative safety of either Morocco or the UK, to turn their backs on countries which, for all their differences, do offer their citizens education and opportunities.

Yet that is one of the more controversial aspects of The State, a Channel 4 drama which screened in August this year. The meticulously researched Peter Kosminsky drama managed to perform the Piers Morgan-like feat of simultaneously pissing off elements of the left and the right. There were voices from the left who thought it was unnecessarily brutal while voices from the right disapproved of the humanising of characters who left Britain to join the vile forces of Islamic State.

Both sides are being ridiculous. The brutality portrayed in The State was accurate and, as such, was not gratuitous. There is nothing pleasant about a scene where you can hear a knife slowing sawing through the neck of an innocent man, or a beheading where the neck is first scored by the blade and filled with salt before the final blows of the sword, or a woman having the soles of her feet lashed for talking briefly to an unrelated man. But the apologists for Daesh need to see this, to realise exactly what violence and misogyny they are giving a despicable leave pass.

The humanising aspect is also important, particularly of the characters of Shakira, the young mother and doctor who stupidly believes she will be able to do Allah's work in the occupied hospitals, and Jamal, the young man who is labouring under the misapprehension that he can be a heroic martyr like his dead brother.

Terrorists are made, not born. They are not created in a vacuum. Nobody is born wanting to leave their friends and family and everything they have known to fight for a sickening cause. To know this is to still have hope that the current insanity will pass, that we can live in a world where no young man or woman thinks that joining Islamic State is a reasonable thing to do.

For both Shakira and Jamal, they realise they have made a terrible mistake. Shakira was happy to put up with the passive-aggressive Mean Girls In Hijabs environment of the women's compound in order to work as a doctor but her final straws come when she is asked to remove both kidneys of injured American soldiers for transplants and when she spots her son playing football with a severed head. Jamal, meanwhile, found almost homoerotic camaraderie with his fellow recruits but realises he has not got the stomach to either watch or carry out beheadings. When he rescues a Yazidi rape victim and her daughter, he treats them tenderly but ultimately cannot save them.

The ending is pitifully appropriate - as Jamal is led away after being unable to behead a pharmacist he has befriended, you know his future is not bright. As for Shakira, she manages to escape with her son but upon her return to the UK, her ludicrous dream to stop more young women leaving for Syria by speaking out in the media about the realities of life under Daesh is crushed by the authorities at the airport.

Instead of becoming the poster girl for reformed jihadi brides, a BBC talking head as opposed to a severed head, Shakira's reality is that she will have to be an informant, constantly looking over her shoulder as she seeks out possible cells of radicalisation and reports back to the authorities on their activities, all the while living with the horrendous guilt of exposing her son to vile ideology and some of the worst violence on the planet.

On balance, I endorse such actions by our authorities, if the fictional dealing with a Daesh escapee is the reality. Only time will tell if the British approach or the Moroccan approach will be more successful in stamping out terrorism.

In the meantime, I would urge people to check out The State if they haven't already. Hell, it's worth it for the cheeky adverts Channel 4 has included in the download. I'm not sure if it was by accident or design, but it was a perverse joy, amid some of the hardest television I've ever watched, to be regaled with adverts for things that make the extremist lunatics really mad - the secular Jewish family getting together for food, wine and piss-taking in Friday Night Dinner, the sex-and-drug-fuelled rampages of teenagers in Skins, and Father Ted, featuring Roman Catholics laughing at themselves in a way the extremists never could.

Photography by Gwydion M. Williams/Flickr
Posted by Georgia Lewis at 10:35