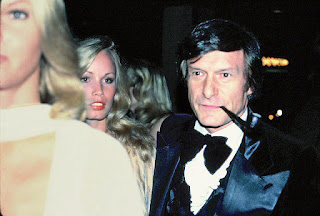 I suppose I should be grateful to Hugh Hefner. With Playboy, he created the market that created a job for me from 2003 until 2006 - in those years, I was working as a sub editor at the Australian edition of FHM, the men's magazine which launched in 1985 and, ultimately, was eaten alive by the internet.

But in my time there, I worked with people who actually had ethics. I received nothing but support from male colleagues after I was followed by a man in a car when I walked home alone one night after a 15-hour day in the office, or when my terrible neighbours were having drug-fuelled arguments outside my flat door at 3am and I turned up to work looking like death, and when there was a family tragedy. The office fell silent and sad when we looked at our watches and realised that a young Australian man had just been executed for drug trafficking in Singapore in mitigating circumstances in 2005, and when a member of staff was sent the video of the beheading of Kenneth Bingley in 2004.

There was was one bad apple who was on staff briefly. He was a very junior member of staff, who I later discovered behaved in a sexually aggressive way towards a friend. He ended up being struck off my friends' list when he revealed himself to be a racist worshipper of Stefan Molyneux. And a member of staff, who worked across other magazines in the company, was dealt with severely, and rightly so, after he called one of the entrants in an FHM modelling competition after spotting her phone number on the back of the photo she sent in, back when people still entered competitions by post. I still remember how appalled the guys in the office were when word got out about that incident.

When it comes to writing, there are very few sacred cows in the barn when you work on such a magazine and everyone is under constant pressure to be the funniest person in the room. But jokes about race or rape or paedophilia, for example, did not find their way into the pages. A lot of the jokes were self-deprecating jokes about men written by men.

There were lines in the sand. We didn't really need to be told where the lines were, and if anyone was unsure they'd run it past someone else, or it would be filtered through the editing process, because we were essentially decent human beings. FHM was an excellent example of media self-regulation, something which tends to cause panic among fans of censorship and restrictions on press freedom.

Sure, there were gags in bad taste - I made a few crass jokes myself in the line of duty - but there was an innate sense of decency even amid the farts, belches, hangovers and comedowns.

Yet I am not going to worship at the altar of Hugh Hefner.

Yes, Playboy published many excellent articles, genuinely good and groundbreaking journalism, witty opinion pieces from men and women. He paid writers well and, in many cases, they were pieces which would not have found their way to press anywhere else.

Yes, Hugh Hefner gave airplay to black writers, activists and entertainers through publication of their work and interviews.

Yes, the Playboy Foundation funded the first rape kits in America, which are essential for evidence-gathering in such cases.

Yes, Playboy was one in the eye for prudish conservatives and lovers of censorship.

But here's the thing. Hugh Hefner could have achieved all of the above without doing anything from the list below.

He didn't have to sleep with Dorothy Stratten to apparently further her career, with the support of her obsessive husband, Paul Snider. Snider, by the way, ended up shooting her when she was just 20 years old, before turning the gun on himself. Nor did Hefner have to ensure she posed for Playboy when she was still 17.

He didn't have to publish full frontal nude photographs of a 10-year-old Brooke Shields posing in a bathtub, her face plastered in makeup.

He didn't have to publish photographs of 11-year-old Eva Ionesco in the Italian edition of Playboy in 1976.

He didn't have to refuse to wear condoms during his sex parties at the Playboy Mansion.

He didn't have to pay Marilyn Monroe a pitiful $50 for her Playboy shoot, a shoot from which he profited handsomely over the years.

He didn't have to be a douche in death by spunking $75,000 for the crypt next to Marilyn Monroe's final resting place.

He didn't have to impose controlling rules such as 9pm curfews, restrictions on social life, and insistence on sex on demand, on the women in the Playboy Mansion. If you seriously think every woman in there genuinely loved her time in the mansion or truly had a wide range of life choices available to her, you're deluded. Plenty of women came out of the mansion physically or psychologically damaged - it's not sex-phobic or prudish to say so. It's reality.

And so here we are, in the post-Weinstein era, with Hugh Hefner barely cold in his grave, and plenty of men are whining about how they just don't know what to do with themselves anymore. Apparently, for these poor little petals, a new culture where girls and women are not afraid to speak out about the whole spectrum of sexually abusive and inappropriate behaviour, will be the death of flirting and will prevent people from having relationships.

Except that nobody has said that flirting or touching or sex with consent should be banned, or that workplace relationships will suddenly stop. Hell, I met my own husband at work without either of us exploiting the other. If the right to say no does not exist, the right to say yes is meaningless. If the right to give consent disappears, we live in a wilderness where entitlement to the bodies of girls and women reigns supreme.

Men do not have to rape women, or harass women even after they have told them they are not interested, or stalk women after break-ups, or follow them home as when they walk alone, or call them sexually explicit and unasked-for names in the workplace, or kerb-crawl them, or demand they smile when they have the temerity to not beam like a beauty queen at all times.

All the things we are asking of men are not onerous demands, just as Hugh Hefner did not have to do any of the awful things he did when he was alive.

So I am not going to sit here in eternal gratitude for Hugh Hefner. Even if his legacy never happened, even if FHM never happened, I am pretty sure I still would have found work in publishing and, more importantly, progress in areas such as civil rights and rape case investigations still would have happened. And I am pretty sure the men I worked with at FHM would still be decent human beings and not exploiters of women and underage girls.


Photography by Alan Light
Posted by Georgia Lewis at 09:25