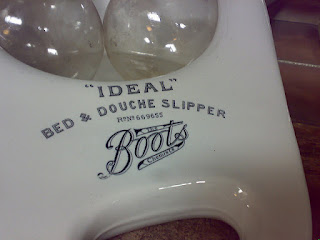 When I was a wide-eyed nine-year-old in 1985, I was utterly enchanted by Boots chemists. My family was in the UK at the time and the branches of Boots seemed way more interesting than the pharmacies of rural Australia. I loved the scripted typeface of the logo, I loved the choice of goodies that I had never seen on offer at the Lake Village pharmacy in Wagga Wagga, it seemed like a magical place.

These days I have a more prosaic view of Boots as a reliable source of everything from aspirin to hair brushes to cheap lunches. But in the last six-and-a-half years since I moved to the UK, Boots has found its way into the news for the wrong reasons. It has become the subject of multiple calls for boycotts but it's pretty obvious, given the ubiquity of the blue logo across the country and with tentacles internationally, that the boycotts are not working.

Ongoing reports on corporate tax avoidance - which is perfectly legal although the morality is up for debate - usually mention Boots. Tax avoidance is a sound reason why many people boycott Boots. It is a hard one to boycott because it is usually just so damn convenient to pop into a branch of Boots when a minor ailment threatens to ruin your day.

As a company that gets a lot of business from the NHS, there is a good case for it paying a bit more tax to help fund their golden goose. It is estimated that Boots make £2bn a year from prescriptions alone - that is £2bn of taxpayer money.

There have also been allegations of Boots profiteering from the NHS through selling customers unnecessary medicine-use reviews. Despite its Methodist church roots, Boots is a business which is now owned by US giant Walgreens. It is not a charity, so such unsavoury revelations about making extra money off gullible customers are hardly surprising.

Then Boots jumped the shark again a few weeks ago with the news that it was not going to drop the price of the morning-after pill. It sells Levonelle for £28.25 and a generic version for £26.75. Competitors, Tesco and Superdrug, are now selling it for £13.50 and £13.49 respectively. This could have been an entirely unremarkable story if the justification by Boots for charging more than double the price of their two main competitors was simply a matter of a private company charging what it thought it could get away with for a product.

In a free market economy, there is nothing immoral about a company charging a price that it thinks will help cover its overheads and contribute to profits. As consumers, we have the freedom to seek out the goods for a cheaper price, which is precisely what you can do if you need the morning-after pill and you'd rather pay less than half the price at Tesco or Superdrug.

But Boots told the British Pregnancy Advisory Service that they were keeping the price high to avoid "incentivising inappropriate use". Yeah, that can just fuck right off. Since the outcry and calls for a boycott over Boots passing judgement on its own customers, they have apologised and announced they are now looking for cheaper alternatives to Levonelle. Well, good. Women don't take the morning-after pill for a lark, especially if they suffer side effects such as nausea and headaches. Hell, even at £13.50, it's not an especially cost-effective option for regular contraception. But it's also nobody's business how often they choose to use it.

In the midst of the birth control brouhaha, plenty of people stuck their heads over the parapet to remind us that the "incentivising inappropriate use" snark was not the first time Boots had passed judgement on customers. If you buy baby formula from Boots, you cannot get Boots Advantage Card points for your purchase or use your accumulated points to pay for formula for babies up to six months old.

As well as disincentivising "inappropriate use" of birth control, Boots has also taken it upon itself to cast judgement on women who are not breastfeeding babies aged under six months and would like them to avoid being "incentivised" to use formula inappropriately. If you are struck down with mastitis or you didn't have time to express milk or you need to spend time away from your baby during the first six months or you are a new mother undergoing cancer treatment or you simply choose not to breastfeed, Boots is judging your life decisions.

Ugh. But the good news is you can buy baby formula elsewhere, just as you can with birth control. Consumer choice is a good thing.

And then Boots found itself in the media spotlight again, this time with a small but vocal furore over the slogan "Plastic is fantastic".

In this instance, however, the outrage is completely pathetic, a manufactured fauxrage from the permanently offended. The outcry came as a result of Boots using the slogan "Plastic is fantastic" on its range of clear plastic toiletries bags. According to those on board the outrage bus, this slogan encouraged the excessive use of plastic and, hot on the heels of the Levonelle debacle, Boots deleted the slogan from their marketing materials and website. It was a tiny blip in the news cycle but it was cretinous all the same.

I saw this story very briefly on BBC News when I was on holiday and realised I had one of the offending toiletries bags with me. They are fantastic because they are reusable - you can pop travel-sized toiletries into your hand luggage and at airport security, it's more environmentally responsible than having to cram your lotions and potions into a single-use ziplock bag. It's still plastic, there should be some way of recycling it responsibly when it finally falls apart but, given current airport security regulations, it beats the miserable ziplock bag alternative. Fantastic.

Frankly, Boots should have owned the slogan and refused to take it down. The removal of the slogan won't do a damn thing to save the planet. Equally, if they had've simply said they were not dropping the price of the morning-after pill for reasons of capitalism that would have been better than coming out with a load of crap about "inappropriate use".

As for no Advantage points on baby formula, maybe Boots need to consider the awful possibility of a widowed or abandoned father with a young baby. He can't breastfeed, he will need to buy formula. Wet nurses aren't really a thing these days. As things stand at the time of writing, this unfortunate chap can jog on if he thinks he can use his Advantage points on a product that will ensure his poor kid doesn't starve.

Still, now I've pointed out how this ban can affect men too, maybe Boots will change its baby formula policy. After all, there are no Advantage points restrictions on any male-specific products in Boots, not even hair dye for men which surely encourages the cultivation of "inappropriate" tresses on deluded middle-aged blokes.

And unlike the discreet popping of a morning-after pill, we have to look at obvious bad dye jobs on men all the time. You can't tell me Anthony Scaramucci's hair is Danny Zuko-black without some help from the bottle. Hey, look at that sad 50-something twat fly past in his midlife crisis sportscar! What a desperate loser he must be! Maybe I'll boycott Boots in a bid to stop men with "inappropriate" hair appearing in public. What's that, guys? I can't say that because I'm shaming men for their choices? Oh, really...

Photography by Banalities/Flickr
Posted by Georgia Lewis at 16:22