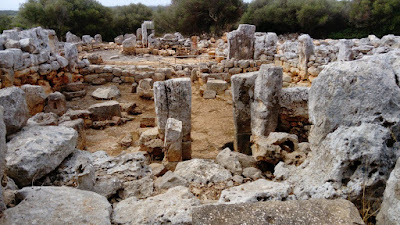 I'm back from Menorca where I visited the remains of one of an estimated 300 Talayotic settlements because I find it impossible to travel anywhere without checking out the local ruins. I am also a lot of fun at parties...

Every time I seek out the history of the places I visit, inevitably it is proven that the more things change, the more they stay the same.

From what archaeologists have been able to piece together from the remains of the Talayotic settlements of Menorca, it seems they probably were, like most of us, peaceful people who just wanted to be left alone. Perhaps they could have been an island-based libertarian people if it wasn't for the interferences of the Carthaginians, the Vandals, the Byzantines, the Romans, the Islamic caliphate of Cordoba and finally, the Roman Catholic church.

Over the course of the Talayotics' time on Menorca, from 1400 BC until AD 1287, they consistently favoured round buildings. They knew about farming animals and crops, their houses had kitchens with hearths, they had wells for clean water, there is evidence of early flushing toilets, they were skilled potters, and, before the influences of Islam and Christianity, they had their own religion, possibly based on worshipping fertility, nature or the bull, with complex funeral rituals. At their archaeological sites in Menorca, you can see the taula - structures with smaller rocks balanced on top of larger, upright rocks, like miniature Stone Henges.

There were positive interactions with other cultures through trade, thanks to the island's strategic location on shipping routes to mainland Europe, north Africa and Turkey, creating a vibrant economy and influencing art, crafts, and jewellery trends. Examples of ancient Egyptian artefacts and Carthaginian religious statues have been found on Menorca.

The sea trade led to some people from other countries settling peacefully and productively in Menorca, most likely in the emerging port towns - an early example of beneficial immigration.

But ultimately, the Talayots would not be allowed to live in peace, to enjoy the interactions with new cultures and benefit economically, because their gorgeous, fertile island was just too damn tempting for conquerors. And it turned out to be pretty easy pickings for multiple invaders who would ultimately destroy a centuries-old culture, estimated to have started in 1400 BC.

Just as the despicable barbarians of Daesh see fit to lay waste to the once-magnificent sites of Syria, it is always the ignorant prerogative of conquerors and colonisers to impose their beliefs and ways on people who were minding their own damn business.

The Carthaginians had an early influence on the Talayotic and if it had only been restricted to introducing new tools and ornaments and helping the island's early settlements to develop, they might have come out of this history lesson well. But the Carthaginians and the Romans didn't really get along and fought three long, tiresome wars between 264 BC and 146 BC. As such, Talayotic Menorca became a source of cannon fodder for both sides, starting with the Carthaginian invasion of Menorca is 252 BC, the first chipping away of the peaceful Talayotic society.

As ever, old men were sending young men to die in wars and the young men didn't get any say in their inevitably terrible fates. When Talayotic men were forced to fight for either the Romans or the Carthaginians, neither of whom were benevolent conquerors, it's not hard to be reminded of the same choices facing young men in Syria today. Today, they could find themselves siding with equally religiously conservative forces with the Iranians or with the forces of Assad, a terrible dictator regardless of what his apologists might try and tell you. With those sort of shitty options, it doesn't take a great leap of imagination to work out why fleeing might seem like the best of a bad bunch of choices. Unfortunately for the men of Menorca, escaping the island by sea when the conquerors are controlling the ports probably wasn't feasible.

In 123 BC, the Romans finally achieved their grim dream of conquering the island. This led to the development of the ports of Mahon (now the capital of modern Menorca), Ciutadella (founded by the Carthaginians and the capital from the 4th Century when it became the seat of a bishop, which remains to this day) and Sanitia. Early Christian relics and buildings have been found from this era, such as basilicas from the 5th Century. This was the start of Menorca, and indeed wider Spain, becoming an overwhelmingly Roman Catholic part of the world.

There was a brief blip of literal vandalism, when the Vandals had a go at Menorca around AD 427 but the Romans quickly stamped out that one, it was incorporated into the Byzantine empire, and they had a stronghold on the island for around four centuries.

Depressingly, this represented yet another era of anti-semitism for the appalling annals of world history. As well as the traditional Talayotics, there was a Jewish population on the island. There is no evidence to suggest the Taloyotics ever tried to stop the Jews from observing their faith. Synagogues were built by the Jews, the Talayotics continued to live in round houses and conduct their own religious ceremonies.

Sadly, the Romans weren't quite so cool with Judaism. The Jewish population on Menorca was largely successful and prosperous and in AD 418, Bishop Severus wrote about a forced conversion to Christianity of the 540 Jewish men and women. As well as forced baptisms, the wealthy Jewish families were forced away from the affluent port towns to the hinterlands. Synagogues were burned and Jewish families could only move back to their port homes if they publicly accepted Christianity. The arrogance of assuming that forcing mass conversion to Christianity as a panacea for all ills did not start with Ann Coulter offering that breathtakingly simplistic solution to Islamic terrorism 12 years ago.

Then there was an Islamic caliphate - Menorca was annexed to the Caliphate of Cordoba from AD 903 to AD 1231. Written sources describe a lively economy based on agriculture and a culture of literature. Pottery from this era indicates that it was an artistic period - interestingly, the convent in Ciutadella has a museum which features attractive examples of Islamic pottery. These have been found at Talayotic settlements, indicating these people embraced Islam, leaving behind their still-mysterious traditional beliefs.

The caliphate was known, unlike the modern day caliphate-mad murderers, for advances in science, language, geography, music and fashion. Early Spain first enjoyed toothpaste and deodorant thanks to the Caliphate of Cordoba.

Moors immigrated to the island at this time. In the absence of a 10th Century Menorcan Daily Mail, we are not entirely sure whether the Moors were considered "the kind of immigrants we like" or "invading with their creeping Sharia". What we do know is that the caliphate era was a curious one for religious cohesion. There was a Jewish population on the island and synagogues continued to be built alongside mosques and churches. Jewish stonemasons helped with the spectacular columns of the Great Mosque.

Jews had a higher social standing on Menorca than Christians under the caliphate, although both Jews and Christians had to pay tax to the caliphate. There is no evidence to suggest forced conversions to Islam during this time. It was, on the basis of all available evidence, three centuries of stability for the island and it would be fatuous to compare this to the attempts of Daesh to create a state in what remains of Syria.

It's unclear what life under the caliphate was like for women. However, there are written reports of the Talayotic men refusing payment for their services as soldiers by the Romans and Carthaginians, preferring wine and women to money. Whether the caliphate put a stop to carousing with wine or the using of women's bodies as a commodity for rewarding soldiers is uncertain.

Plenty of history books will tell you that any remnants of the Talayotic world came to an end in AD 1231 with the wording usually along the lines of the people "accepting the Crown of Aragon". This to me smacks of a people browbeaten by centuries of invasions rather than a willing embrace of what was to become modern Spain. The island was left in the confusing position of being an independent Islamic state but also a tributary to King James 1 of Aragon.

It cannot have been a smooth and seamless transition to Aragon rule as there was a violent conquest by Aragon forces between 1287 and 1288 with all Muslims on the island either being ransomed or enslaved to Barcelona, Ibiza or Valencia unless they converted to Christianity.

So, well played, conquerors and colonisers, you all played your part in wiping out a peaceful, productive people.

Of course, the story of conquests on Menorca does not end in AD 1231.

In AD 1558, Barbary pirates - Ottomans who operated from North Africa, destroyed Mahon and Ciutadella in the 16th Century and settled there while also sending off the 3,452 survivors to be enslaved in Constantinope, which strikes me as a dick move given that in previous centuries, the Ottomans (modern day Turks) traded peacefully with the island.

In AD 1713, the British took possession of what was by this time a very Roman Catholic island. Demonstrating that colonisers and conquerors cannot bloody help themselves, the Brits actively encouraged foreign non-Catholics to move to the island. This included Jews who were not well accepted by the now-predominantly Roman Catholic Menorcans. Clergy refused a request from the Jewish community to use a room in Mahon as a synagogue.

In AD 1781, Louis des Balbes de Berton de Crillon, a French Roman Catholic soldier and twat, led the overthrow of the British garrison, returned Menorca to Spain, became the self-declared first duke of Mahon and, because he was just an awesome and peace-loving guy, he gave the remaining Jews four days to leave the island. They were transported from Menorca to Marseilles in Spanish ships. Transportation of Jews. Where have we heard about that before?

So, to recap, the Talayotic people were usurped by a load of fuckery that still goes on - anti-semitism, the forced imposition of religions, false notions of cultural and religious superiority, forced military service, enslavement... And still we don't learn from history. And with this week's ridiculous and awful events in Charlottesville and the pissing contest that rages on between Donald Trump and Kim Jong-Un, it is hard to be optimistic about anything improving any time soon.