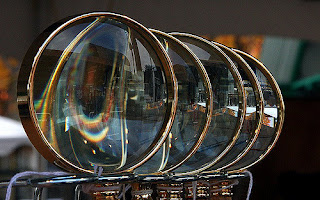 "Optics" is becoming the new "I misspoke". The new bullshit excuse. The new cliche when something isn't a good look. Or high praise when it is a good look.

Remember the fad of saying "I misspoke!" when all someone did was expose themselves as an idiot/racist/sexist/cloth-eared dolt/intellectual bankrupt? Misspeaking is when a kid calls a teacher Mum or Dad, it's a genuine slip of the tongue, it's often a Freudian slip, such as Sophy Ridge saying Kezia Dugdale is the leader of "Scottish Labia".

Now this election campaign we've all endured - largely with the able assistance of vast quantities of liquor, with all its car crashes from across the political spectrum - has popularised the good versus bad optics cliche. But it's lazy, shallow and lacking in nuance.

It was terrible optics for Tim Farron, the leader of the Liberal Democrats, when he flubbed and flopped in response to questions about his attitude towards gay sex. Never mind that he has a better voting record than Theresa May on LGBT rights and it would appear he can keep his private religious beliefs out of politics - the story became an excruciating series of images of Farron looking uncomfortable.

Compare those scenes with Theresa May being asked by Andrew Marr if she thought gay sex was a sin. Without hesitation, she crisply answered "No.", And that was the end of the debate, even though her voting history on LGBT rights has only recently become progressive. It was obvious that she was ready for the question. It looked like she had been rehearsing her answer in the bathroom mirror.

It was good optics.

Now she is desperately trying to eke out a deal with the notoriously homophobic DUP - surely these are the worst optics of all for her if she is trying to convince anyone that she gives a damn about LGBT rights.

And this nonsense is not limited to politics.

A few days ago, The Pool reported on a ridiculous PRWeek event in which an all-male panel addressed the audience on how to fight sexism in the workplace. PRWeek is generally pretty sound - it's a good source of news on the PR industry as well as a fine place for PRs (and journalists looking to cross to the dark side for more money) to find jobs. So you'd think an event run by an organisation dedicated to public relations would not be quite so tone-deaf as to host a festival of weapons grade mansplaining. Yet that is what happened.

The explanation for this debacle (at an event called "Hall of Femme" - I ask you...) was that "the optics might have appeared off". 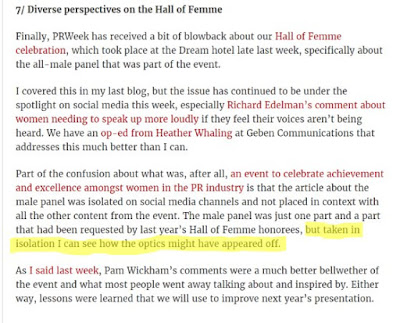 Jesus H. Christ on a two-wheeled perambulation device. No, This is not merely about how it looked. It's about how it was. It's about how bloody patronising it is to expect a room full of women listen to a room full of men tell them where they're going wrong and to offer pearls of wisdom about speaking loudly, rather than being listened to, and "stretch opportunitoes" when, for some women, the opportunities simply are not there.

The "optics might have appeared off" is a shallow excuse for stupidity.

And, sometimes, when the optics are good, the reality is bloody awful. Just ask Theresa May.


Photography by savertashe2/F;ickr
Posted by Georgia Lewis at 06:46