No ifs, no buts, no excuses, there is a global problem with rape 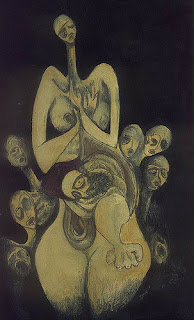 "No punishment for man who raped girl, 12" was the stark headline on the BBC News site on Friday. Never mind that since 2009 under British law, anyone under the 13 is deemed unable to give informed consent to sexual intercourse. This negates the defence of consent in such cases, except the judge Lady Scott decided it was not in the pubic interest to punish Daniel Cieslak, who pleaded guilty to rape, saying it would be "disproportionate given the nature of the criminal culpability here".

The girl in question said she was 16 and CCTV footage confirmed to Lady Scott that it was reasonable for Cieslak to assume this was the case. He procured alcohol for her even though he knew she was, at the very least, too young to legally consume it.

Well, if that decision isn't a goddamn gift for paedophiles as well as rapists in general, I don't know what is. What is the bloody point of even having age of consent laws when the line in the sand can be easily washed away on the strength of CCTV footage and a tearful defendant?

Still, the same judge has form here. In 2013, she sentenced Hamadache Hamza to just six years for weekend-long rape ordeal that took place in the victim's flat, despite the Crown Prosecution Service guidelines suggesting five years as the starting point for a single offence rape sentence, eight years for rape with aggravating factor, and life imprisonment as the maximum sentence. Lady Scott's reasoning was that Hamza had come to the UK from Algeria, overcome a difficult background, and set up a successful hairdressing business and this had to be taken into account.

Never mind that most people who are either immigrants or have come from a difficult background, or both, manage not to rape people. In the world of Lady Scott, these two factors lessen the severity of the crime of depriving a woman of her liberty and her right to personal safety and bodily autonomy for 48 awful hours - and she insults every law-abiding immigrant and every law-abiding person who has come from a disadvantaged background in one fell swoop.

These are just two of the endless cavalcade of examples of rape-related bullshit from all over the world. They are examples are from Britain but Britain is not unique in the ways it fails women and girls.

Rape is not unique to any particular race or religion or social class or profession. That is what makes the problem seem so insurmountable. To single out any one group is to throw the bodies of women under countless other buses. It is a grotesque game of whack-a-mole - while we villify one group based on the example of a few, women are still being raped by other men in other places and in other circumstances, whether it is at the hands of a stranger, as a weapon of war, or in the depressingly likely scenario of being raped by someone she knows.

What is particularly tiresome is the constant minimising of women's anger by men. Just today, a friend of mine from India posted an opinion piece on her Facebook page which advised women not to come to India. It was written by an Indian woman, it was an agonising cry from a woman who does not feel safe in her home country. Pathetically, a man jumped on the page to tell us that there was no use in getting angry.

With all due respect, sir, fuck off. When you are not feeling threatened on a daily basis, it is easy to wonder what all the fuss is about. But it is something women live with every day of their lives in every country in the world. I completely understand why millions of American women choose to take advantage of the second amendment and carry a gun.

The reason why women collectively roll their eyes when they are told to be careful when they leave the house, is not because we are obstinate little flakes. It is because we know already. We bloody know. We make a habit of being careful all the damn time. We carry our keys in a position that is suitable for jabbing an assailant as we walk from the bus stop to the house. We install sensor lights near our front doors so we're not fumbling about in the dark for too long. We tell each other to text as soon as we get home safely. We help each other into taxis. We feed each other water and kebabs and paracetamol when we've had too much to drink. When Judge Kushner said that we are entitled to "drink ourselves into the ground" but our "disinhibited behaviour" could put us in danger, she was not saying anything new.

Still, at least Judge Kushner didn't compare women to cars or houses by using the horrible "You don't leave your car or house unlocked when you go out" rape analogy. Reducing our bodies to a comparison with the contents of a glove compartment or a jewellery box is appalling, reductive nonsense. And if you do get burgled because you forgot to lock a door, you might just get more sympathy than a rape victim who was drunk or wore a short skirt or wore a long skirt or only drank water or left the house or caught a bus or went to work or had the temerity to leave the house in possession of a vagina.

"You silly bugger; leaving the house with the door open!" is hardly on par with the disdainful spite of "Well, you were asking for it, walking around that part of town at that time of day..." when you've just had your body violated in the worst possible way, shy of actually being murdered.

And then if something horrific does happen to us, we'd better hope and pray our assailants aren't wealthy, privileged, or have a great future as an athlete or a city trader because they may just get a sweet deal from a judge.

That is if you report the crime at all. I know plenty of women who have not reported rapes. This is usually because of fear: fear of being disbelieved, fear of ending up on the wrong side of the law in countries where premarital sex is illegal, fear of spending a lot of time being humiliated and reliving a repulsive experience for no justice to be done, fear of bringing shame to the family, fear of the reaction of one's partner, fear of simply making a fuss...

Please do not start with the "But men get raped too!" line. Yes, they do. They do not get raped in quite the same numbers as women but male rape is no myth. And guess what? They are usually raped by other men.

And male rape is, like female rape, drastically under-reported. Oh Lord, I wonder why that might be? When men see what crap women are put through when they attempt to get justice for being raped, where is the incentive for them to report the crime when they are raped?

If more women are confident to come forward without being accused of "asking for it" when reporting a rape, perhaps it will follow that more men who are raped will come forward too. This is a prime example of how achieving justice for women and girls has the potential to help men and boys.

Indeed, the eternal pit of dick-driven ignorance was fed by the unctuous Philip Davies MP recently when he tried to derail the passing of a bill to recognise the Istanbul Convention in a bid to prevent violence against women and girls.

Predictably, all the douchebros came out of the woodwork to cheer Davies on because men get attacked too. Except clearly none of these intellectual bankrupts bothered to look into the finer points of the Istanbul Convention which quite plainly recognises that men and boys are victims of violence too. But that would require doing some research, becoming informed, not simply believing everything a pig of an MP tells you because it suits your hateful little narrative.

These are the same men who disbelieve the low rates of false accusation and see nothing wrong with someone who admits to grabbing women by the genitals, someone who feels so permanently entitled to access women's bodies, is now the president of the United States. Indeed, yesterday it emerged that Theresa May thought Donald Trump was "a gentleman". Brilliant. Britain's second woman Prime Minister has been gaslit by a self-confessed sex pest.

And so we continue, the women and girls of the world, to constantly take precautions against rape, to be constantly on our guard, because that is our normal. For some, normal means regular rape by a partner. For others, normal means rape at the hands of terrorists. For some, it just means never quite feeling safe.

If you have never felt that fear, you are automatically privileged. It is your duty to stand alongside those who are not so fortunate, the women and girls of the world.

"Nightmare of a Gang Rape Victim" image by Syed Ali Wasif/Flickr
Posted by Georgia Lewis at 12:43