In defence of John Bercow 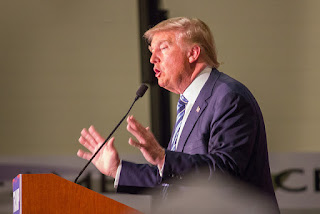 Poor Donald Trump. When he visits Britain, he is going to be no-platformed everywhere he goes, the media will completely ignore him, nothing he says will ever get reported, and the people of this country will have absolutely no idea he is even here. Poor little Donny won't have any freedom of speech.

Except that will not be how it pans out when he takes up Theresa May's embarrassingly fast invitation to pop across the pond and say hello. His visit will dominate the news cycle for days. His views will be heard by millions. This is a man who makes global headlines every time he tweets. He has more platforms than an Olympic diving team.

But none of this has stopped Trump's British apologists from demanding John Bercow resign. This is all because Bercow plans to use the power he has as speaker of the house to not invite Trump to address MPs in Westminster Hall. Please note that Bercow has not called for Trump to be refused entry to the UK or to never speak to anyone or for press conferences to be called off.

All he has done is refuse Trump an invitation to speak at Westminster Hall as a statement against Trump's racism and sexism, and to send a message of British support for equality before the law and an independent judiciary, both concepts that seem to elude the wit of Trump. Bercow had the opportunity to take a stand, to speak out on behalf of British values and he took it. He can look back on this in years to come and be very proud. Good on him.

Bercow's upholding of support for an independent judiciary is particularly important. This week, a 44-year-old man from Hertfordshire was arrested at Gatwick Airport on suspicion of planning a terrorist attack when he disembarked from a flight from Iraq. British idiots, who are apparently experts in US constitutional law, started saying that this was proof that Britain should copy Trump with travel restrictions for people with passports from Iraq - except that at this stage we don't know if the arrested man had an Iraqi passport.

It is entirely possible that the arrested man only has a British passport, in which case a travel restriction would not work. And even if he does have an Iraqi passport, he has been arrested before committing a terror attack on British soil. This would indicate that we don't need to copy Trump because our intelligence services and police are already being effective.

The same idiots who called British judges "enemies of the people" for ruling that our democratically elected MPs should have a vote on triggering Article 50 for leaving the EU are siding with Trump instead of the independent judiciary on the issue of the travel restrictions yet, curiously, they also have a lack of respect for our counter-terrorist forces, even when they do their job properly.

Trump's apologists have also pointed out this week that Bercow has shaken hands with leaders of such undemocratic regimes as China and Saudi Arabia. This is true but these leaders were not invited to speak at Westminster Hall. In any case, plenty of people who are supporting Bercow have also publicly objected to the human rights abuses of both countries and plenty of others with whom Britain breaks bread.

Barack Obama only got the opportunity to address Westminster Hall in 2012, after he had already served an entire term as president. Aung San Suu Kyi has addressed Westminster Hall, which made a powerful statement against the despotic forces in Burma that have imprisoned her and attempted to silence her over the decades. Nelson Mandela has also had this honour. While there are debates as to whether he was a freedom fighter or a leader of thugs, it is hard to argue that he was not a towering figure in ending the official policy of apartheid in South Africa.

In this historic context, for Theresa May to offer Trump a state visit within moments of his election is desperate, premature and completely embarrassing. In the wake of public pressure as well as an outcry that has transcended party politics, it looks like Trump will still be coming over here but his visit will be scaled back.

The latest news is that instead of London, the visit will move to Brexit heartland of the Midlands and Trump will use the opportunity to raise funds for British veterans. Oh good. So basically Trump is employing the same tactics of far right hate group, Britain First. They gained a lot of social media traction by posting things many people who are by no means extremist will agree on, such as support for our troops when they return from war zones and memes about not being cruel to dogs. But Britain First, like Trump, also holds plenty of despicable views. It would appear they are both playing the "But I support the troops!" card as a distraction and in an attempt to mislead people.

In any case, charities such as Help For Heroes should not have to exist in the first place.

If a government sends men and women to war, to risk death and life-changing injury, the least they can do is ensure that injured veterans are housed and do not slip into abject poverty. If Trump was going to schedule a meeting with the defence secretary on how the US and British governments can better help injured veterans when they return home, that would at least deserve some respect. The latest reports indicate Trump wants to host a mass rally with tickets at £10 a head.

Trump can expect protests wherever he goes. Moving the visit away from London won't stop that. People will travel to make themselves heard and it is simply wrong to assume that everyone in the Midlands will be delighted about Trump turning up in their neighbourhood. If anyone wishes to exercise their right to protest when Trump arrives, that should be respected. This will not impede Trump's right to freedom of speech.

Peaceful protest has long been a hallmark of British democracy. With the latest anti-Trump protests, there have certainly been some potty-mouthed banners, especially in Scotland, but peaceful does not mean colourful language is verboten.

In any case, Britain has outdone itself in the last few weeks with the most polite online petition ever.

At the time of writing, 1,853,814 people signed up to the following: "Donald Trump should be allowed to enter the UK in his capacity as head of the US Government, but he should not be invited to make an official State Visit because it would cause embarrassment to Her Majesty the Queen."

To say that Donald Trump is free to visit this green and pleasant land but that it should not cause embarrassment to an elderly woman is adorable. And, if Trump doesn't get to meet the Queen, that will really grind his gears. But it does not mean for a second that his freedom of speech is being denied. Seriously, Trump apologists of Britain and the world, get a grip.


Photography by Matt A.J/Flickr
Posted by Georgia Lewis at 11:28