St Helier Hospital, the political football that keeps getting a kicking... 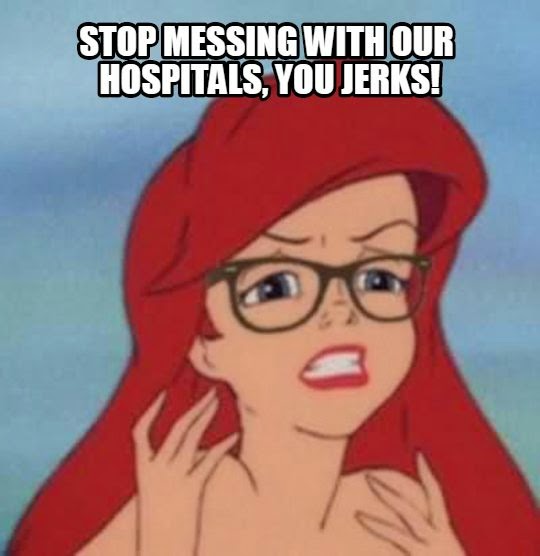 We suspected as much when we took the time to read a little-known document, the South West London Collaborative Commissioning strategy document. Yes, I am sure it is on your bedside table right now too. In short, it outlines strategies for “efficiency savings” (Read: cuts) for hospitals across South West London. It telegraphs keeping all services at St Georges Hospital in Tooting (as seen on Channel 4’s 24 Hours in A&E) at the expense of services at either Epsom, St Helier or Croydon University Hospitals, or a combination of the three.

This makes sense from an axeman’s point of view because St Georges has a PFI debt and this basically makes it too big to fail. St Georges has enjoyed the addition of a helipad, it is a major trauma centre for vast swathes of England, it occupies a huge site just off Tooting Broadway, it is at breaking point. St Helier Hospital is a handy back-up for St Georges. As well as taking its own patients in A&E and maternity, it is a place for St Georges to send ambulances and women in labour when it’s at full capacity.

And, in the midst of threats to St Helier Hospital, a new and misleading narrative emerged.

The major parties, all desperate to look like they are serious about local health services, all desperate to win the forthcoming election, started parroting the line from the trust itself that St Helier Hospital was “safe for five years”. This has appeared on leaflets that local politicians have shoved through my front door. And, yes, we all knew there were plans for an overhaul of local services in the next few years and the strategy document tells us that after that, vital services at St Helier and Epsom Hospitals (the two hospitals that make up the Epsom-St Helier Hospital Trust) could be eliminated.

So that is where this “safe for five years” line has come from.

We’re talking about the elimination of piddling little things like A&E, maternity, paediatric intensive care and the renal unit, no biggie… Except that without these, other services are then imperilled – the assisted conception clinic works with maternity, the fracture clinic works with A&E, the eye clinic that works with anyone with eyes, and so on and so forth…

The strategy document is just a reheated version of the farcically named “Better Service, Better Value” review that cost taxpayers at least £8 million, including (and this will become relevant soon…) loads of our damn money spent on hiring private consultancy firms to advise on how to best carve up local healthcare services.

Still, the major parties kept parroting the mindless “safe for five years” rhetoric. As if that is good enough. As if aiming for such a low target of five years of service followed by an abyss of uncertainty for patients and staff was somehow acceptable. As if nobody bothered to ask why, when all the proposals that have been bandied about will involve expenditure, investment in making Epsom and St Helier Hospitals as good as they can possibly be was not on the table.

And then last week it all kicked off.

First, Nick Clegg and incumbent LibDem MP for the constituency of Carshalton and Wallington, Tom Brake, thought it’d be a jolly wheeze to stroll on the green opposite St Helier Hospital for a photo opportunity. Just a photo opp, mind. They had no intention of taking questions about the hospital or the wider NHS. But 18 hours before the event, word got out that they were going to descend on the green. Protesters from KOSHH, the National Health Action Party, the Labour Party and the Greens did a great job of disrupting things. Good.

A tragic, orange placard-waving LibDem rent-a-crowd fawned over Nick Clegg as he said, with a straight face, that the cadaverous Tom Brake had worked really hard to keep the hospital open. Hint: Tom Brake has done no such thing. All he did was set up an e-petition so long ago, it is now addressed to the wrong body. I have no idea when he plans to hand it in or to whom. The only thing the e-petition has achieved is a bigger mailing list for Brake’s propaganda emails. A lot of people signed the e-petition in good faith. A lot of people have been taken for mugs.

And then, that very afternoon, an astounding story broke on the BBC. The story that showed KOSHH campaigners are not a bunch of scaremongering cranks after all.

Representatives of a private consultancy firm were overheard on a train to Waterloo talking about a proposal to build an 800-bed “super-hospital” on the site of Sutton Hospital, a place that died the death of a thousand cuts and is now a depressing, largely abandoned site and the recent victim of an arson attack.

And why the hell do we keep spending taxpayer money on private consultants? Oh, that’d be because the wretched Clinical Commissioning Groups, created by the Tories and the LibDems under the rancid Health and Social Care Act 2012, force doctors to become experts in things other than medicine and they require expensive, external advice. This advice isn't necessarily in the best interests of accessible patient care, mind you...

But local Tories and LibDems would sooner enjoy a napalm enema than admit that the actions of their parties in the House of Commons have put St Helier Hospital in jeopardy.

Instead, we are witnessing desperation politics of the highest order as local party stooges attempt to shut down discussion about the Health and Social Care Act or use the tired old cliché of “Don’t use the hospital as a political football!” to try and shut down debate. Sorry, kids, it is political. There is no way around that. Deal with it or pipe down and let the grown-ups talk.

Jeremy Hunt, the failed marmalade mogul who passes for the Secretary of State for Health, intervened, presumably after a panic-stricken call from local Tories who were seeing their hopes of winning the seats of Carshalton & Wallington and Sutton & Cheam evaporate before their very eyes.

In world record time, Hunt released a hastily chucked-together statement saying that a Conservative government would block any plans to build a hospital on the Sutton site. Slippery as ever, he did not actually mention blocking any plans to close either Epsom or St Helier Hospitals.

I have a few questions at this juncture. Firstly, why the hell would anyone trust anything this man has to say on the NHS? Secondly, did he really have time to read all three proposals in full, including costings, in the midst of an election campaign in order to make such a bold promise? Thirdly, given Jane Ellison said, when she was Health Minister, that the government has lost control of the NHS and that this is "exciting", can Hunt make such a promise at all? (Also, Jane Ellison's idea of excitement and my idea of excitement are two very different things...).

So, there you have it. The BBC has exposed a bunch of overpaid private consultants who were either too arrogant or too stupid to think nobody would overhear them talking at length about a meeting with the Epsom-St Helier Trust CEO, one Daniel Elkeles. This would be the same Daniel Elkeles who told KOSHH campaigners a few weeks back that, surprise, surprise, St Helier Hospital was safe for five years. He just omitted to tell us that after five years, the hospital may be gone entirely.

What a bloody mess. But just as well the mess has bubbled to the surface before the election. It might force people in SW London to think hard about who they vote for on May 7.

And in the meantime, here are some questions that need to be answered as a matter of urgency.

1.  Can details on the three proposals, including full costings, be made available as soon as possible? And would a new hospital on the Sutton site be a PFI hospital?

2. Will the costings for the Sutton Hospital site hospital include the massive roadworks and transport upgrades that would be required to cope with the massive traffic increase for a residential area with narrow streets?

3. Why is the term "super-hospital" being bandied around for the 800-bed Sutton proposal when that would actually mean a decrease in beds for the area? What services would actually be provided at this place?

4. Will there be an independent analysis of travel times for ambulances that would have to go to Sutton instead of Epsom or St Helier's A&E, including those that are diverted from St Georges Hospital in Tooting?

5. Will there be an independent analysis of journey times for cars as this will affect women in labour?

7. When did Daniel Elkeles, the Epsom-St Helier Trust CEO, first become aware of these plans?

8.  Why should anyone believe any promise of Jeremy Hunt's or any Conservative after the broken promise about no top-down reorganisation of the NHS?

9. Could the Sutton Hospital site land be disposed of expediently to ensure the "super-not-so-super hospital" option doesn't happen?

10. Given the other two options involve rebuilding St Helier Hospital and refurbishing Epsom Hospital, can we see how the combined costs of these compare to the Sutton Hospital option? Both these hospitals deserve the investment to make them the best they can possibly be.