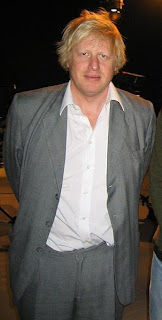 As an Australian who lives in Britain surely I am overjoyed that Boris Johnson says Britain should welcome Australians in with open arms. Surely, reasons BoJo, that because we're all part of the cosy Commonwealth, Australians should be able to live and work in Britain with the same ease that EU citizens can. After all, despite the Commonwealth being a quaint and archaic hangover from the days of the British Empire, these days it's all so much happier. We all love nothing better than a spot of sporting activity at the Commonwealth Games, it's like a big, old school athletics carnival. Everything is simply marvellous in the Commonwealth!

First, as an Australian and therefore a Commonwealth citizen and someone whose home country has the Queen as head of state, it did seem rather farcical that when I married a British man and wanted to join him in London after living in the Middle East, I had to fly from Abu Dhabi to Sydney, hand over a bunch of paperwork to the British High Commission in Canberra and then wait a couple of weeks for a spouse visa before flying to London. Despite being an avid republican, there surely must be some advantage to being part of the Commonwealth, so I understand Boris's call for closer ties with my native land.

But I do wonder if Boris realises he has perpetuated a few stereotypes that take us right back to the grim days of the White Australia Policy. This was a horrible, shameful era in Australian immigration history and, tragically, one that many Australians are probably nostalgic for today in the wake of the "Stop the boats!" propaganda being peddled by Tony Abbott, the conservative who will probably be the next Australian Prime Minister.

In a piece Boris wrote for newspapers in Australia and Britain, he cites the case of Sally Roycroft, an Australian teacher who has achieved great things in troubled areas of London but will not be sponsored by her employer. As such, she will have to leave Britain despite making a real contribution here. That is an awful situation and, sadly, commonsense does not seem to apply to her immigration status.

But when you read deeper into Boris's diatribe, he talks of how Australians are just like Brits. To prove this point he offers examples such as walking around Sydney and seeing ads for Jamie Oliver recipes, meeting Aussies who watch Top Gear. In short, it is a very white, middle class picture of Australia that has much in common with white, middle class Britain. He then goes on to say that in 1999, Australians voted to retain the Queen as head of state rather than become a republic. Except none of this reflects the broader picture of multicultural Australia or multicultural Britain. And it certainly ignores the harsh reality of life for many indigenous Australians, very few of whom have thrived since Britain first colonised my country.

Of course, it is easy for me to say this with all my white privilege. And if it wasn't for convicts landing in Australia in 1788, I would not have ever existed as an Australian. I'm married to a British man. I can stay here for as long as I like. Good for me! I work here, I pay tax here, I have frequently been told that I am "the kind of migrant we want here" - which usually means "white, not a Muslim, native English speaker, no funny accent, enjoys Fawlty Towers". I'm not likely to be singled out at a tube station by an Home Office official to ensure I am here legally. I am sometimes mistaken for a British woman (although less so, the more I drink).

And it may well be time, as Boris says, to establish a bilateral Free Labour Mobility Zone between Australia and Britain. I can see how that could benefit the labour markets of both countries. Plenty of Eurosceptics would hail this as a victory for commonsense immigration, for more immigrants who "integrate".

But, with Boris's help, they are conjuring up an image of more white Anglo-Australians coming to Britain despite Australians being way more than descendants of convicts from a rat-infested fleet 225 years ago. We are way more diverse and vibrant and interesting than that. Ethnic minorities are growing and education rates are on the rise - a bilateral labour agreement might not produce an influx of Aussies who resemble the cast of Neighbours, despite the BoJo-enhanced stereotypes. And given the disadvantages faced by indigenous Australians, particularly in education, I'd be surprised if such an agreement would enhance their opportunities to work or study in Britain.

Charities such as World Vision and Marie Stopes work in Australia to provide assistance to indigenous Australians where successive governments have failed. Perhaps the people who have suffered as a result of poor educational opportunities, lack of decent healthcare and, in too many cases, blatant racism, could come to Britain as refugees? Or would that be too much for Boris? After all, he picks and chooses which bits of EU membership he likes so why wouldn't he do the same when it comes to Britain's relationship with Australia. Which should include all Australians.