On being told to go home 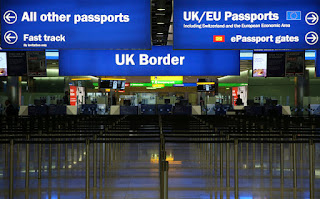 I'm an immigrant. I was not born in the UK, my passport says I'm Australian. But I have indefinite leave to remain in the UK, I am married to a British man, I work here, I pay tax here, I vote here. I am a privileged immigrant - I have not been subjected to horrendous racism in the eight years that I have lived here. Of course, I have been told more than once that I'm "the kind of immigrant we like", which is usually code for "white skin, native English speaker, not a Muslim" - that is obviously racist too - but I have never been subjected to the sort of racist abuse that leaves people fearing for their personal safety.

Only once have I been told to go home. It happened a few weeks ago on Twitter (where else?) when I had the temerity to express an opinion on the sorry state of British politics. Some faceless, nameless, gutless individual felt the need to reply to me, saying that if I don't like it here, I can always go back to Australia. The tweet was accompanied by a picture of an angry bloke holding a blue passport. (Spoiler alert: I've had a blue passport my whole life and they're not that exciting...).

But plenty of people get told to go home all the time. It's tiresome, it's repetitive, it's wearing and, above all, it's racist. When the president of the United States uses the "go home, go back to where you came from" rhetoric, it's still racist. The two men who are vying to be the next prime minister, however, were unable to say that Trump's words were racist.

In a particularly pathetic display on BBC Breakfast, Jeremy Hunt said he wouldn't use "the r-word". The r-word? Really? It's one thing to say "the n-word" rather than lower oneself to use a particularly vile racial slur against black people but to reduce a word that was entirely accurate in the context to "the r-word" is pitiful. He then went on to say that he was the father of two half-Chinese children, as if that made everything OK. It doesn't make anything OK. If anything, it makes things worse - if some cretin told Jeremy Hunt's kids to go back to where they came from, would he condemn that person as a racist? Or is it only people we're seeking trade deals from that get a leave pass to be a bigot?

Of course, that was everyone's defence of the mealy-mouthed responses of Boris Johnson and Jeremy Hunt to Trump's awful comments. It's the Special Relationship! They're our closest ally! We need to do a trade deal after Brexit! Ilhan Omar's a racist too!

A few things: the special relationship predates the Trump administration and it will long outlive his presidency and the premiership of either Johnson or Hunt; trade deals take years to negotiate and a negotiation with the US will almost certainly go on for longer than our next PM is in office; and if a trade deal is done in a hurry, it will not be a great deal for the UK. Trump means it when he says "America first".

And in regard to Ilhan Omar, it is possible to disagree with her position on a number of issues without resorting to one of the oldest racist insults in the book. We should be better than that, but it seems that, increasingly, we are not.

We've reached peak whataboutery when it comes to accusing people of racism, particularly in the Labour and Conservative parties. Anyone who dares call out anti-semitism in Labour is guaranteed to have someone yell "But what about Tory Islamophobia?" at them and vice versa. How about we aim to reach a place where none of it is OK? How about we stand up against racism without trampling on another group which also experiences racism and ensure our own houses are in order before we start deflecting attention to the house across the street?

This is how we've ended up with Katie Hopkins using her supposed support of Israel and Jewish people as sticks with which to bash Muslims, even though she is not above making anti-semitic comments herself and making allusions to a "final solution" or using dehumanising language when it comes to migrants. Hopkins merely picks on a group of people for her own self-promotion and profit. If it's not Muslims, it might be poor people or obese people or people with tattoos or any other group she seeks to demonise in her desperate quest to stay relevant. Any one of us could be her next target and her loyal band of haters will gleefully wave their pitchforks and join in the pile-ons.

It's no coincidence that Trump and Hopkins are in bed together, at least in the online world, with their cosy, bile-laden circle jerk of mutual tweeting.

Trump's comments matter on this side of the pond because many people over here look to him for inspiration, to legitimise their own awful views. We do need to maintain a relationship with the US but it is possible to do this without lowering ourselves to Trump's level. Britain must be better than that if we are at all serious about remaining an influential country, if we are serious about setting an example to the world, if we care about our standing in the global community and, above all, if we truly love this country and the people who call it home.


Photography by Jim Larrison/Flickr
Posted by Georgia Lewis at 10:55