In defence of Meghan Markle 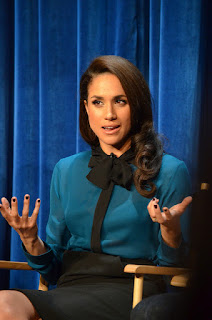 If we were still living in Tudor times, Meghan Markle, the heavily pregnant Duchess of Sussex and triggerer of idiots across the nation, would be in what was known as her "confinement" by now. And the aforementioned idiots would be over the moon that she was out of sight and out of mind, spending the final months of her pregnancy cooped up indoors, drinking brews of questionable medical efficacy, her staff on the lookout for the slightest sign of labour in between prayers being said for mother and child.

But thankfully times have changed and Meghan is going about her business as what is hilariously known as a "working royal" with her bump on display for all the world to see. And this is causing so much offence, as if she should leave the foetus in the car when she dares to step out in public.

A quick trawl through the sadder recesses of the internet reveals an especially tragic, creepily obsessive underbelly of cretins whining about Meghan putting her hand on her bump (as if she is the first-ever pregnant woman to reflexively, instinctively be protective of the growing contents of her uterus), being too showy with her choice of stylish maternity wear (as if the world of style needs a return to the dire days of billowing maternity dresses cut from acres of fabric that would not be out of place on a nursing home sofa) or faking the pregnancy (as if it's impossible that a healthy, attractive, wealthy couple would easily conceive despite most likely having all the sex or accessing the very best fertility care available). There have even been especially absurd sad cases accusing Meghan of being involved in a plot to stop Brexit.

Of course, when Meghan isn't being too overtly pregnant or making devious political plots, her pathetic army of haters will find other things to pick on. The other day, she was slagged off for not wearing tights while signing a book of condolence for the victims of the terror attacks on the Christchurch mosques and holding her husband's hand in public as they emerged from the car.

Jesus H. Christ on a two-wheeled perambulation device, would you people listen to yourselves? Do you know how ridiculous you all sound moralising about tights and public hand-holding? You're all one royal engagement away from demanding that table legs in the presence of duchesses are covered for fear of outraging public decency.

If telling women who have fallen off the lowest rungs of society's ladder that they are important and valued means that people might just look at these women as important and valuable, why is that a bad thing? Just try and answer that question without sounding like an arsehole.

The same people who were moved to tears by Diana simpering to Martin Bashir that she wanted to be the "queen of people's hearts" (show me to the vomitorium...) are often the same people condemning the sometimes schlocky but generally well-meaning words of Meghan. Diana was a fine actress, someone who knew exactly what she was doing when she teased the media, but when someone who has worked as an actual actress marries a royal, the old nose-in-the-air tropes about princes and showgirls rear their tedious heads.

Indeed, it is Meghan rather than Kate who has picked up where Diana left off, with the genuinely good work she did in raising awareness about issues such as land mines and acceptance of patients with HIV and AIDS. It is Meghan who has thrown herself into causes, both fashionable and unfashionable, since becoming a duchess, while it took Kate months to work out what causes she might support so that she had a purpose beyond breeding.

A lot of the hatred towards Meghan is rooted in jealousy, prudishness, snobbery or, at its most sinister, barely concealed racism.  There are grown women (and it is mostly women, sadly) out there, walking among us, who seem to think Prince Harry would have married them, if only this stunning, smart, caring woman hadn't stood in the way. The mere fact that she is American is a trigger, as if she deliberately deprived a British woman of her rightful royal husband. Watch these titwits clutch their pearls at the revelation that Meghan and Harry had a date camping under the stars in Botswana very early in their relationship. STOP THE PRESSES! THEY PROBABLY HAD SEX OUT THERE WITH ALL THAT WILDLIFE ROAMING ABOUT!

These envious, venomous, intellectually bankrupt women are generally perfectly OK with Kate Middleton, the Duchess of Cambridge, citing her as an example of "class" while Meghan is slagged off as "tacky".  "Class" is often a racist dog-whistle here, for what they are really saying is a white Englishwoman is an "appropriate" bride for a prince, while a mixed-race American woman is not. Whenever someone is obsessed with "appropriateness", it is almost always a cue to mentally cross them off any future party guestlist because you know they will be about as much fun as a yeast infection, as is the way with bigoted dullards.

And, of course, as an American divorcee, the tedious comparisons with Wallis Simpson pop up, as if Meghan too is a Nazi sympathiser, as if she is somehow going to undermine the institution of royalty.

Never mind that this deeply undemocratic institution has survived not just Edward's abdication but the affairs of Charles and Diana, the subsequent divorce of Charles and Diana, the death of Diana, the remarriage of Prince Charles, the Duchess of York's toe-sucking debacle, serious questions over Prince Andrew's alleged sexual peccadilloes and those of some of his awful mates, Princess Michael of Kent generally being a terrible human being, issues surrounding the taxation arrangements of the royal family and their estates, taxpayer-funded palace renovations, security and clothing, rumours currently fizzing away on Twitter about Prince William having an affair, and Prince Phillip's casual racism and bad driving - apparently, if you're an intellectually bankrupt hater, it will be Meghan Markle that will bring the whole damn house down.

Spoiler alert: if the royal family comes to an end, it won't be because of the saucy, woke wife of the guy who is sixth in line to the throne.