The World Cup should be political 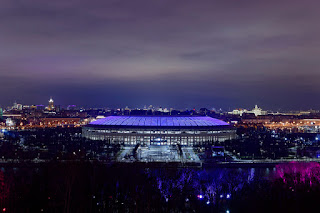 Predictably, when Peter Tatchell, a long-time gay rights campaigner, was detained in World Cup-crazy Moscow last week, there were plenty of wails along the lines of "Why can't people leave politics out of sport? What did he expect when he broke the law in Russia?".

Tatchell held up a banner that accurately said: "Putin fails to act against Chechnya torture of gay people", was arrested, questioned and detained for a few hours and then released on bail to appear in court on 26 June. He has since been allowed to fly home.

The protest put the Russian authorities in a sticky predicament - on one hand, the government had temporarily tightened already tight laws on freedom of assembly, making it illegal for a single-person protest to take place during the World Cup. On the other hand, Russia is desperate for the World Cup to be a public relations triumph. It would have been a marketing disaster if it emerged that Tatchell was locked up without charge or experienced any kind of police brutality.

Tatchell himself said he was treated well by the police. It was a stark contrast from his visit to Russia in 2007 in which he was attacked so viciously by Russian neo-Nazis that he suffered brain damage, compounding the effects of an attack in 2001 by thugs in Robert Mugabe's Zimbabwe. He is way more courageous than the random bellends on Twitter complaining because someone might have made the World Cup a little bit political. Those same random bellends have probably never been beaten almost to death because of his sexuality. I say "his" because it is almost always a man who gets upset when someone shines a light on an important issue during their ball game. And Katie Hopkins, because of course she did.

When football associations around the world are working hard to fight homophobia and to ensure that all players, regardless of sexuality, feel comfortable and safe when they play, represent their country and socialise after the match, it is only right that Russia's record on gay rights be questioned. The tragedy of Justin Fashanu's suicide could easily happen again, particularly in Russia.

By making a statement in Moscow, Tatchell joins a long and distinguished line of people who have politicised sport to great effect.

The most obvious example is that of Tommie Smith and John Carlos, who both bowed their heads and raised their fists in the black power salute when they won gold and bronze respectively at the 1968 Mexico City Olympics. The silver medallist, Australia's Peter Norman remained close to Smith and Carlos, both of whom were pallbearers at his funeral in 2006. It is one of the most iconic images in sporting history and it is still relevant today.

In 1936, Jesse Owens' triumph in multiple events at the Berlin Olympics dented Adolf Hitler's desire to use the games as a showcase for Aryan superiority and it emerged that Jewish athletes were banned from competing, apart from one athlete with a Jewish father. Many Jewish athletes who had competed at the highest level perished in concentration camps and Captain Wolfgang Furstner, the head of the Olympic village, killed himself two days after the games after being dismissed from the military because of his Jewish ancestry.

It is ironic that Jesse Owens' presence and success at the Berlin Olympics was, in and of itself, a political statement against Nazi racism and at the same time, the pageantry of the Berlin Olympics set the tone for patriotic spectacles at the Olympics in the decades to follow. It is, therefore, only right that the Olympics, as well as World Cups, are used as an opportunity to contemplate what it means to be patriotic and whether patriotism should be blind loyalty to your country.

In tennis, the late Arthur Ashe turned his AIDS diagnosis into an opportunity to raise awareness about HIV and AIDS. He used his last years well and his high sporting profile played an important role in overcoming prejudice and ignorance and certainly helped pave the way for better health policy, increased accessibility to medications, effective prevention campaigns and fundraising for research.

Meanwhile, in South Africa, sport played a role in ending the scourge of apartheid. While it would be fatuous to say that apartheid would not have ended without international sporting boycotts, particularly in rugby and cricket, from 1968 until the early 1990s, they were important in keeping the issue in the news. The decades of sporting wilderness were an acute reminder for South Africans of a racist and untenable political situation.

And it's not just Peter Tatchell getting political at this World Cup. Alliance For Choice, a group which is campaigning for abortion rights in Ireland and Northern Ireland, has been tweeting comparisons between abortion rights for every country competing in the World Cup as they play their opening matches this week. Even Paddy Power, the betting shop chain with a mischievous marketing team, has got in on the act, pledging to donate £10,000 to causes which are working to make football more LGBT+-inclusive every time Russia scores. With Russia giving Saudi Arabia a 5-0 drubbing in the opening match of the tournament, the fundraising is off to an excellent start.

With the next World Cup scheduled to be held in Qatar, it is clear that politics is not going to vanish from football, or indeed most other sports, any time soon. Qatar's human rights and worker safety record has, quite rightly, been widely reported - and its ability to retain the right to host the tournament could well depend on the political situation in the Arabian Gulf over the next four years. Meanwhile, Trump supporters have lost their collective shit over American footballers taking a knee during the national anthem as part of the Black Lives Matter campaign - this most peaceful of protests, amid examples in the streets of violence, has played no small role in keeping stories about race relations in the US on global news cycles.

So enjoy the World Cup, cheer on your country's team, get a bit excited if your team wins in the office sweep - there is nothing wrong with any of that. But if you think politics is going to vanish from sport any time soon, you're naive and you are siding against people of courage from across the decades.